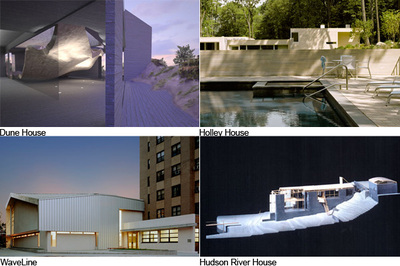 hanrahan Meyers architects (hMa) design projects around themes based in the Natural realm.  In 2006, hMa published ‘Designing with Light’ cataloging the firm’s researches into Natural light and architecture.

Since the firm’s inception in 1987, hMa has also featured Water as an element of their work.  In that spirit, hMa is presenting four projects, beginning with Dune House, a project that is still ‘on the drawing boards’ which may be in construction by 2008;  WaveLine, a multi-purpose space finished 2007 and not yet open to the general public;  Holley House, a 7,000 square foot house in Garrison, New York, completed in 2006;  and Hudson River House, a house designed in 1989 for clients in Nyack, New York.

In each project presented in our gallery of hMa’s ‘water-works’ -  the overriding theme is the idea of designing an architectural frame that intimately connects the inhabitants of the space to water.

As an extension to hMa's work with water, the firm is designing a new Community Center opposite Ground Zero in Manhattan.  The project features a 550-foot long glass wall where hMa are collaborating with sound artist Michael Schumacher.  The theme for the wall is 'water'.  The facace will feature a dot pattern representing a new work by Michael Schumacher, based on water sounds.  Schumacher is composing pieces for a new CD, to be released to coincide with the opening of hMa's building.  A major feature of the new BPC Community Center will be an aquatic center including adult and children's pools. 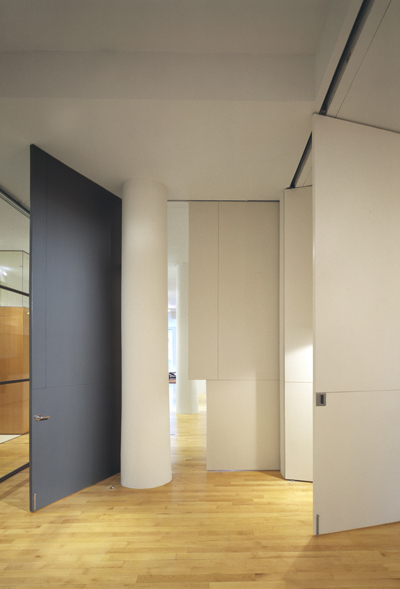 Holley Loft was featured in MoMA’s 1999 show, ‘The Un-Private House’.  White Space / Ash 4Ways received numerous awards including the North American Wood Design and Building Council Honor Award, and is featured on the cover of hMa’s 2006 book:  Designing with Light.  Holley Loft, Ash 4Ways, Singer Residence, and the Glaser Loft will be featured in an upcoming book by James Trulove called Luxury Bathrooms, which will feature the Holley House on the book cover.  Click here to browse inside the book on the Harper Collins website. 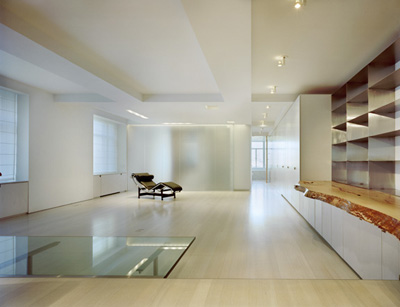 In addition to award-winning design, today’s high-end residential clients demand Green features in the design of their living spaces.  hanrahanMeyers bring significant experience in Green design to all hMa projects.  hMa has experience in Green residential design from their role as Master Plan architects for Battery Park City Authority’s North Neighborhood. hMa wrote the Green Guidelines for over 1,000,000 square feet of residential apartment construction at Battery Park since 2000.  hMa brings this considerable experience and expertise in state-of-the-art Green technologies and materials to all hMa projects.

To see more about hMa’s award-winning and Green design, visit our website:  www.hanrahanMeyers.com

Photos from hanrahan Meyers architects' (hMa's) first 'Clients Only' event held at hMa's office on September 18th, 2007.  Thank you to all who came and to our presenters David Teeple and Cara Fitzpatrick. 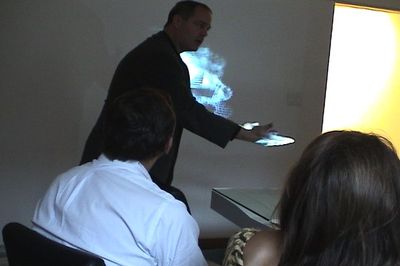 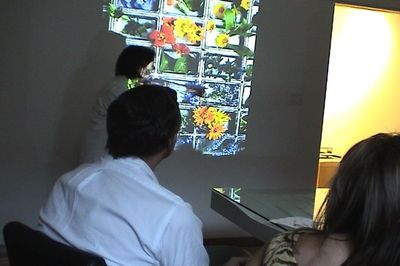 Chef Cara Fitzpatrick pointing out a beautiful and edible plate of flowers. 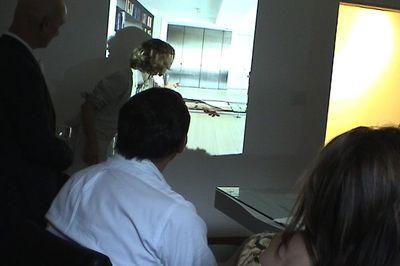 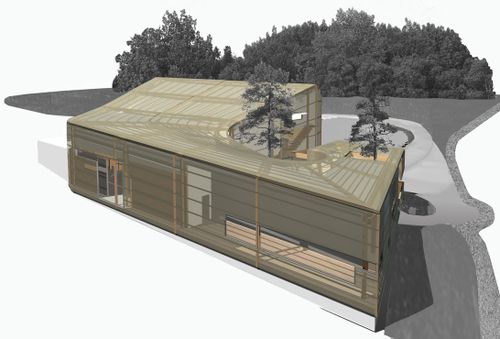 "It's just a shed," Eero Saarinen is reported to have said in disgust when he was asked to modify his design for a covered performance space on the grounds of Tanglewood, the summer home of the Boston Symphony Orchestra.  His dismay aside, the name stuck, and the Koussevitsky Shed has become a beloved venue.  Two similar structures are currently in the works.  Hanrahan Meyers Architects have designed the Ojai Libbey Bowl, in Ojai, California, which will serve as the summer home of the Los Angeles Philharmonic; and this spring, Resolution: 4 Architecture began design on an amphitheater in a cultural park just outside Columbia, South Carolina.

Because the Hanrahan Meyers project is for the Los Angeles Philharmonic, acoustics drove the entire process.  The firm collaborated with Nagata Acoustics, which is also working with Frank Gehry on Disney Hall, on the bandshell's double-layered design - the inner layer, of concrete and wood, is for acoustical purposes, the outer, of translucent fiberglass panels, is for shelter and aesthetics.  A second important consideration was tree preservation.  Principal Victoria Meyers says that when she was told that any scheme that required cutting down trees would never get by the local board, she took the advice literally.  The only way to make the structure big enough to accomodate a full orchestra was to wrap it around two existing trees.  So they did.  All of the service areas and mechanicals are stashed in a spur off to the side of the main stage; the open-air space in between serves, literally, as a green room.

Resolution: 4 Architecture's brief was more general then that of Hanrahan Meyers, but with no less of an emphasis on nature.  Both projects are scheduled to begin construction in 2002, and both offer an elegant rebuttal to Saarinen's critique of a simple shed. 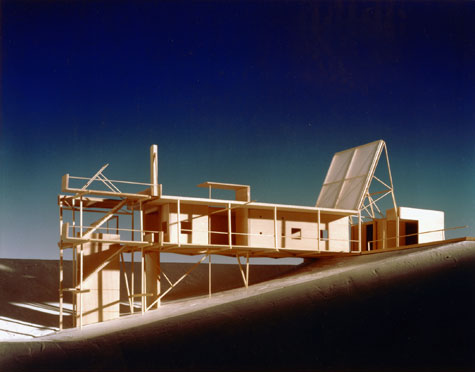 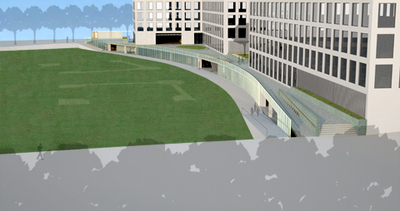 hanrahan Meyers architects (hMa) are committed to Green Design.  In 1987 hMa designed their first public building that gave the firm national recognition as architects with their winning design for the Chattanooga Nature Interpretive Center.  hMa’s Interpretive Center was a forward thinking Green building featuring a solar panel as the building entrance canopy, in addition to other sustainable features.  HMa gives 2 % of the firm’s income to Nature conservation groups every year as an offset to the impact of the firm’s construction projects. hMa currently are architects for a Platinum LEED Community Center at Battery Park City, with construction planned for 2008.

hMa implements their own proprietary Green specifications that apply to all hMa projects including:  recycled content GWB;  use of low VOC paint; and use of high efficiency, energy star rated equipment.  hMa has experience from their role as master plan architects overseeing Green guidelines for Battery Park City Residential Developments since 2000.   In 2005 hMa were hired as architects for the new Platinum LEED Community Center for Battery Park City’s North Neighborhood development.