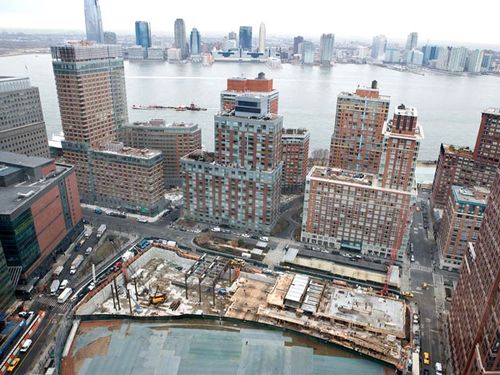 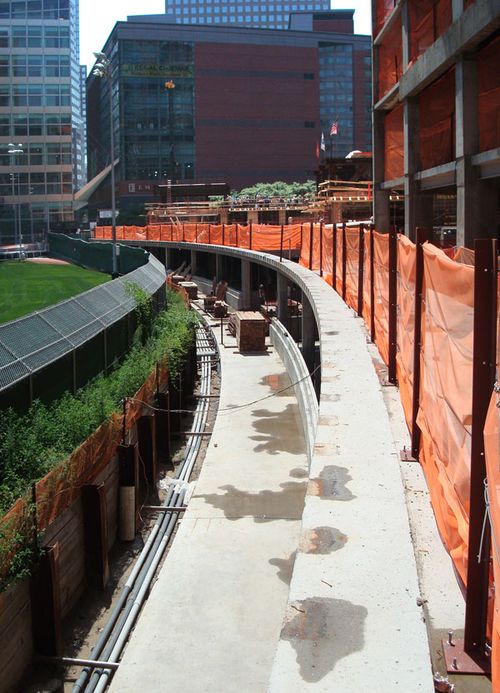 Digital Water i-Pavilion (DWi-P) is a new 60,000 square foot platinum LEED-rated building situated at the base of two new residential towers (not yet built) in Battery Park City’s North Neighborhood.  The primary feature of the new center is a 550-foot long wall of glass, a Musical Membrane, facing West Street, just north of Ground Zero. The Musical Membrane is a collaboration between the architects and New York sound artist Michael J. Schumacher whose ‘tidal movements’ composition will be etched on the glass as a frit pattern / bar code.  Visitors to the ballfields east of the center will walk along a promenade that passes in front of the Musical Membrane.  A recording of the ‘tidal movements’ score will be played in three courtyards along the glass façade. Visitors will be able to walk along the wall and see and walk through the ‘tidal movements’ composition visually, and also hear it at the three courtyards which include sound installations of the composition. 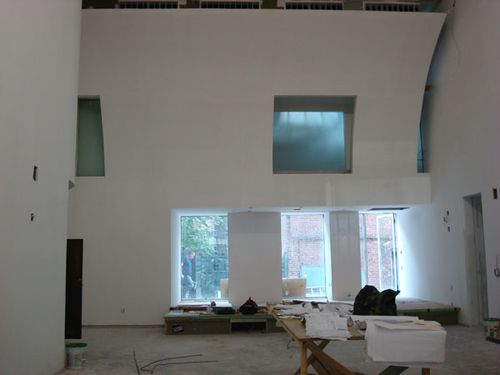 Victoria Meyers architect recently sat down for an interview with Art on Air Radio host Will Corwin.  They talk about Victoria's design philosophy, as the lead designer for hMa, and the firm's current projects.  Click the player below to listen to the full interview (35 min). 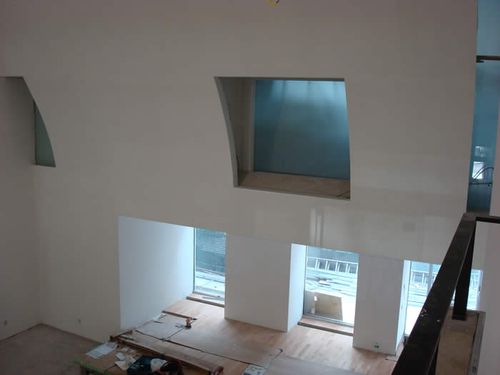 view of chapel from mezzanine; Infinity Chapel by hMa, August 2009 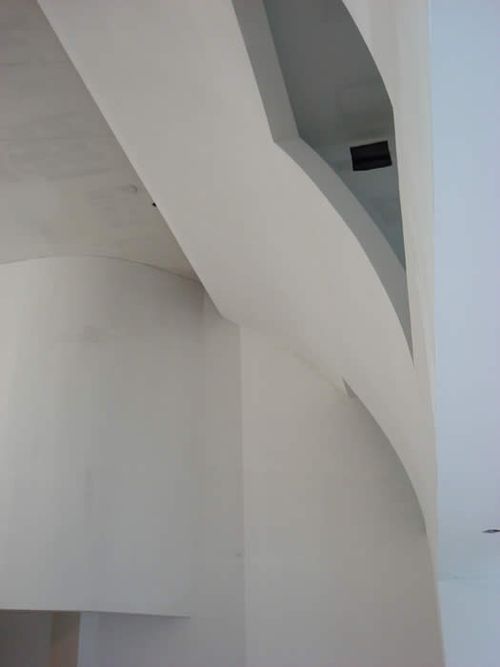 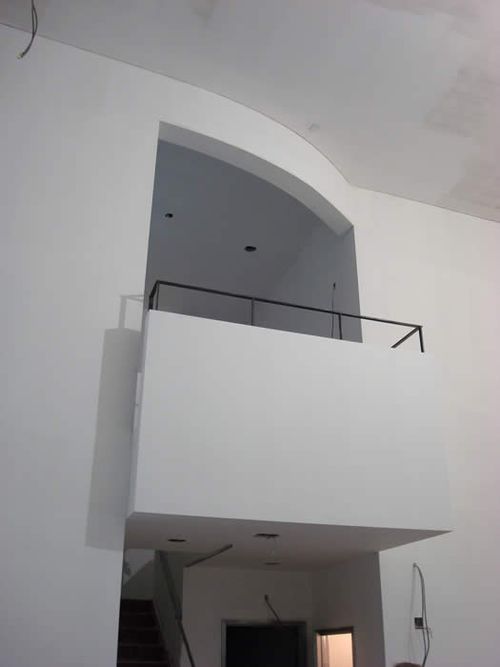 view of mezzanine and curved wall; Infinity Chapel by hMa

Click here to view all photos of Infinity Chapel at www.hanrahanmeyers.com

Shown above are in-progress photos of Infinity Chapel designed by hanrahan Meyers architects.  The chapel design evolved out of conversations between the Architects and the members of the Church:  Tenth Church of Christ, Scientist.

The clients requested a minimalist chapel design that included dyanmic curves and that was in touch with Nature.  The final design for the Chapel reflects research by the Architects into hypercubes and other advanced mathematical forms.  The Chapel interior is a cube, deformed by light.

hanrahan Meyers architects specialize in the design of public buildings that connect to light and to nature.  The Chapel's windows look out into a public meditation garden which will be the focal point of members sitting in the pews during sermons.  The garden is planned to have plantings including a background of Ilex and ivy, with Japanese Red Maples in the foreground.  The garden design is a collaboration between hanrahan Meyers architects and GRDN:  www.grdnbklyn.com.

an image from Farm Sanctuary in Watkins Glen, NY

Farm Sanctuary was founded in 1986 to combat the abuses of factory farming and to encourage a new awareness and understanding about "farm animals." Every year, hMa contributes a portion of their earnings to Farm Sanctuary to help them take care of their many rescued animals.


Read more about the Farm Sanctuary

Read more about the Walk for Farm Animals 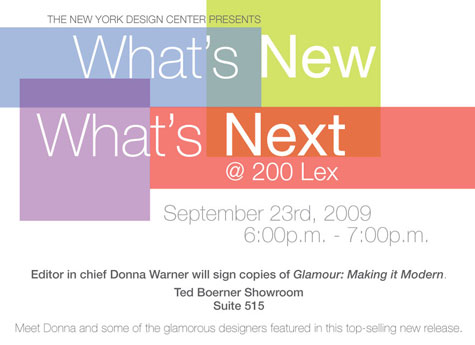 Metropolitan Home Editor-in-chief Donna Warner will be signing copies of Glamour: Making it Modern at the Ted Boerner showroom in the New York Design Center.

The book features hMa's Ash 4 Ways / White Space apartment.  Completed in 2005, Ash 4 Ways is a Manhattan apartment where ash is used in four different states of finish within a minimalist white envelope. 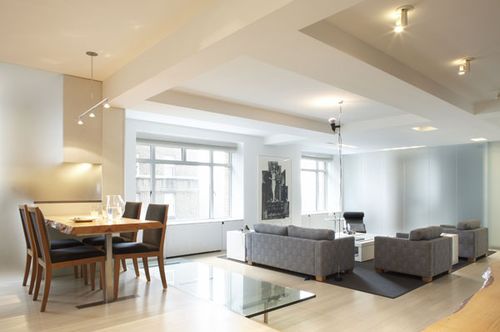 hMa's Ash 4 Ways apartment - the desired overall effect was to create a space of calm where the large pieces of free-form ash from ancient trees could float. This wood is in reference to the Nature in Central Park, which the apartment overlooks

Just as a hyper-cube has changing facets, Victoria Meyers architect (hMa) aspires to have a ‘hyper-practice’.  Even with its infinite folding and unfolding -  the hyper-cube is a unique and singular object.  Even as it incorporates, time and infinite possibilities of form and information, the hyper-cube retains its ability to be recognized.﻿﻿﻿﻿﻿﻿

Victoria Meyers architect (hMa) has a similar image of her practice which she sees as a unique figure intellectually joined to a hyper-spherical object. As a ‘hyper-sphere’ -  hMa is a generative practice that grows, stretches, and morphs over time, without losing its original form. Idea diagrams for hMa's most recent project, 'Infinity Chapel', are presented below, relating Infinity Chapel to the shape of an infinity sign, as well as the three-dmensional shape of a hyper-cube.  Infinity Chapel is designed as a minimalist chapel with the form of a perfect cube, deformed, through time, by light.  This deformation process pushes Infinity Chapel into the form of a hyper-cube. Victoria Meyers architect would like to develop an architectural version of John Cage’s musical composition, Organ² / ASLSP (As SLow aS Possible) – currently being played over 639 years by its interpreters in Germany.  Cage’s piece is an all-encompassing time-piece that touches the earth lightly.  Using a similar approach to our architecture, hMa hopes to achieve a similarly powerful impact, using minimal means.

Infinity Chapel represents hMa's overall concept of buildings that move and transform, over time.  The Chapel is dynamic in form and self-sustaining. 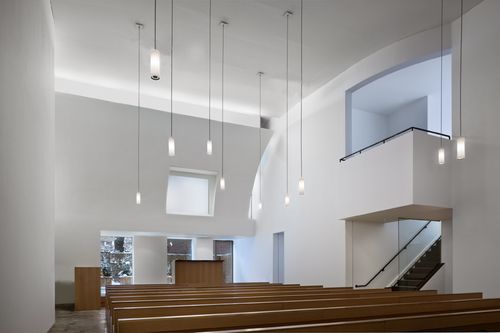 Victoria Meyers architect sees hMa's practice as a sustainable approach to creating buildings and landscapes.  John Cage’s engagement with the world made an impact through works that were sometimes silent, but always powerful. hMa strives to impact human culture through a similar relationship between art and life with projects that respect the environment and occupy the planet with minimal impact.

To see hMa’s version of an ‘infinite unfolding over time’, visit our website, www.hanrahanMeyers.com.  Pass through the site’s main portals by hitting:  ‘hMa blog’; ‘Cultural Conversations’;  and ‘hMa Research’.   These three portals keep hMa engaged in the world in a way that changes, in reaction to time, just as you would expect a hyper-practice should.