Victoria Meyers architect (founding partner, hanrahan Meyers architects) is a great fan of water.  Plain simple pure water.  Water symbolizes purity.  The sound of water is soothing.  Religious rites of purification revolve around water.  The bulk of our body weight is water. Babies in the womb float in water..  Water is part of our nature.

In homage to this precious and threatened vital commodity hMa's collaboration with sound artist Michael Schumacher addresses water directly. Michael Schumacher has been commissioned to write a piece called:  WaTER. WaTER is the basis for the facade of DWiP (Digital Water Pavilion), and our collaboration has been published extensively in previous postings.  Visitors can check the blog history for other posts. 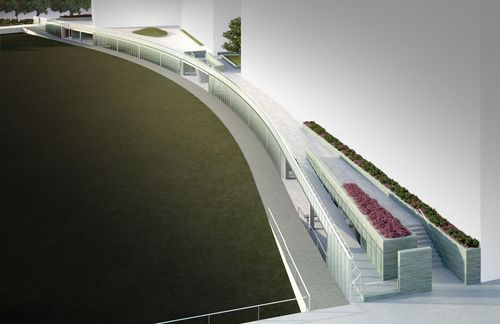 We address ideas that pertain to water from other designers and thinkers in this posting,

First, we would like to commend WET Designs, who New Yorkers are probably familiar with from their design for the new fountain for New York's Lincoln Center.  WET (Water Entertainment Technologies) was founded by Mark Fuller, and the company is based in Los Angeles.   We are linking to an article about Mr. Fuller and his Lincoln Center fountain HERE.   Most people know Mr. Fuller from his amazing water works for Bellagio Hotel in Las Vegas. 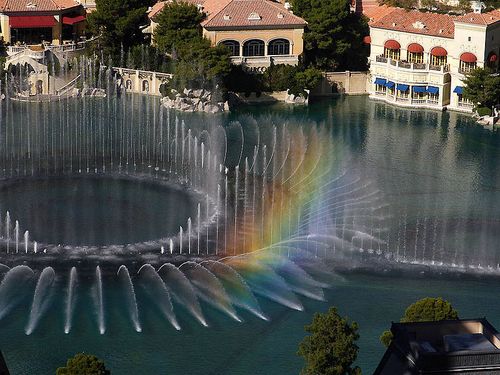 Fountains of Bellagio by WET Design

'My mother was born beside a spring in the high desert, just north of where West Texas and Mexico meet along the Rio Grande.  Born three months premature, she was kept alive in an incubator heated with household light bulbs.  An eyedropper for feeding.  The water from the spring bathed and filled her body, tightening each of her cells.  It filled the hollow of her bones.  Years later, as the water passed from mother to child, like fine hair or blue eyes, I grew up thinking that water and the desert were the same. ...'

hMa pays homage to water with their collaboration with Michael Schumacher on WaTER.   WaTER will be available as an App being developed for the i-Phone as well as Android platforms.

Infinity Chapel in the Architect's Newspaper:
"Sacred Space Reaches to the Light, and Beyond" 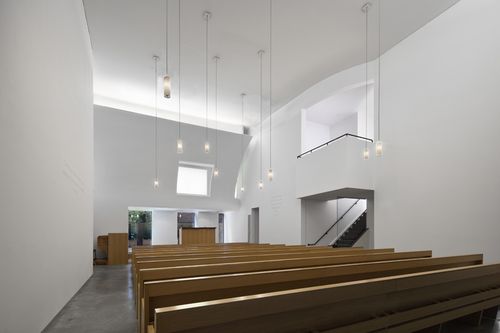 Here is an excerpt from the article published by the Architect's Newspaper on 10/5/2010; written by Branden Klayko:

"Christian Science Reading Rooms are usually closed to the outside world. Five years ago, however, New York’s Tenth Church of Christ, Scientist began a major renovation of its Greenwich Village home to transform the previously concealed space into a light-filled Infinity Chapel. The church engaged Victoria Meyers and Thomas Hanrahan of Hanrahan Meyers Architects (hMa) to design the new sanctuary, including a reading room and below-grade Sunday school. Both church members and architects were interested in a serious exploration of the properties of light in space.

The commission came to the office, Meyers recalled, after the client encountered a book she was writing, Designing with Light, and sought her advice on creating a new model for their sanctuary. She was flattered but surprised, as the book had not yet been printed. (It was published by Abbeville Press in 2006.)

The design process resulted in a remarkably layered sequence of spaces. “We crafted a curvilinear interpretation of a cube that was ‘opening’ through the action of light,” Meyers explained. “Surfaces peel back to reveal other spaces beyond the cube.” In fact, the interlocking experiences of space, light, and form guided the entire design from the beginning. “In this sense, we really saw the chapel as a contemporary interpretation of a four-dimensional figure—a hypercube.” The challenge was to dissolve and layer not only the experience of light and space, but also the visitor’s sense of time."

LINK TO COMPLETE ARTICLE ON ARCHPAPER.COM 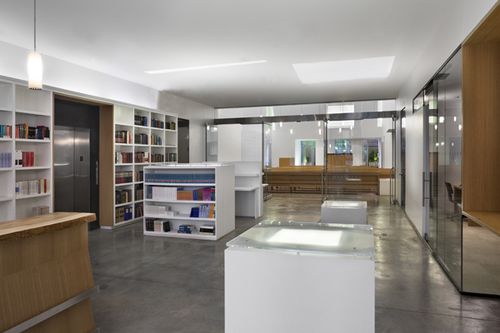 hMa Recommends NYT : A Master of the Stone Wall Discusses the Perfect Fit Here is an excerpt from the article:

"Andrew Pighills has devoted much of his life to stone walls. He began building them as a boy, on his father’s farm in the Yorkshire Dales, in north England. Now, at 56, he is the North American representative of the Dry Stone Walling Association of Great Britain, a group dedicated to the art and preservation of dry laid stone.

“A dry stone wall is a wall built without mortar,” he said. Unlike a mortared wall, which those in his profession refer to as a “wet wall,” he said, “only two things hold a dry stone wall together: gravity and friction.”

Mr. Pighills, who lives in southeast Connecticut, creates landscapes of garden and stone for private and public clients and teaches walling at workshops throughout New England. We spoke with him about his work.

Why did you start building stone walls?

I am the son of a farmer, and I had to build walls to retain the stock on the property. And having had to do it, I found that not only was I good at it, but I also enjoyed it.

What brought you to this country?

I came over to visit a friend, literally for a couple of weeks, and he said, “Oh, no, you should stay at least a month or more.” So I asked him if he knew anybody who might like some stonework done, to pay my way, and he put me through to a gentleman who had quite a large property. I did maybe a week’s work for him. He invited me back the following year to repair all the walls on his property, and while I was there I met my now-wife and eventually moved over here to live full time.


You hold workshops in New England, where there are lots of stone walls. Why is that?

The original walls were nothing more than a heap of stone that was cleared from the land so farmers could plant; they’re what I call clearance walls. Then they became boundaries. Farmers would build a little better than clearance walls to retain the stock, and then, as farming became more profitable and farmers had a little more time — it was probably second or third generation before they got to this stage — they started building actual walls. If you walk through the woods in New England, you will see all three types.

Click here to read the article in full on nytimes.com

Victoria Meyers architect (hMa) presents two views of hMa's Holley House in Garrison, New York, incorporating an existing dry stone wall into its minimalist tableau.  The house features two stone landscape walls that grow out of the ground plane.  To either side of this three-dimensional occupied wall, pavilions project into the landscape.  The house is designed as an atmosphere of nature:  the ancient stone wall in the landscape becomes a centering device for dwelling. 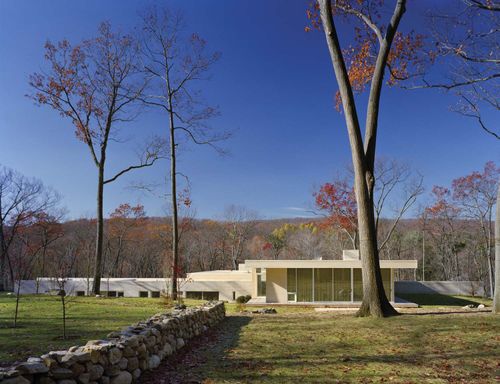 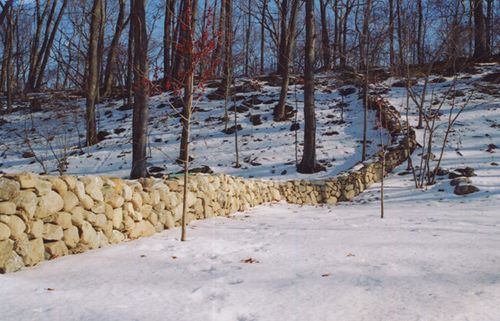 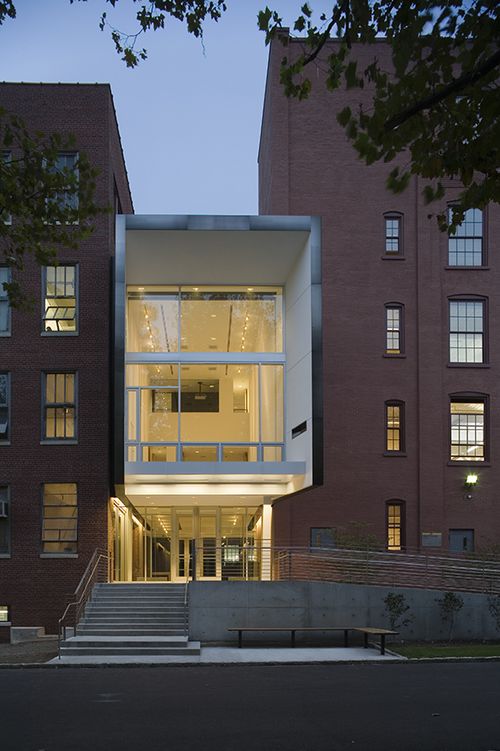 Here is an excerpt from the article on Archinect.com, click the link at the end for the full version:

"Pratt recently opened a 120,000-square-foot green academic and administrative building named Myrtle Hall at 536 Myrtle Avenue between Grand Avenue and Steuben Street that houses the college's Department of Digital Arts as well as several administrative offices."  This building, along with hanrahan Meyers architects' Pratt Pavilion, which launched the Pratt Design Center in 2007, have reshaped the Pratt campus.  Pratt Pavilion was the first project to initiate the redesign and refocusing of the Pratt campus, with buildings facing in toward the campus green, instead of facing out toward the neighboring streets. 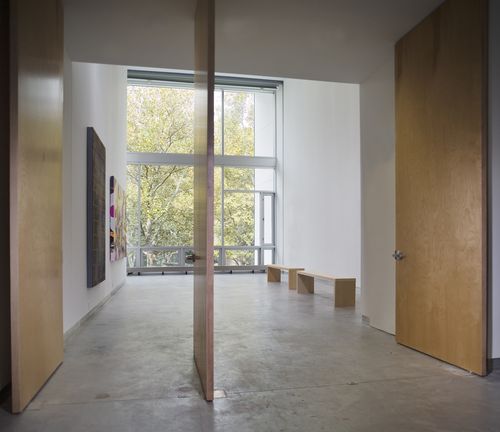 The Juliana Curran Terian Design Center, opened in 2007 and designed by hanrahan Meyers architects brought together two older loft buildings with a contemporary bridging structure to create a 200,000-square-foot complex. The Center brings together Pratt's design disciplines -- interior design, fashion design, industrial design, and communications design -- under one roof that allows Pratt designers to better develop their creative processes.  hMa principal Victoria Meyers was the lead designer for the project, completed in 2007. 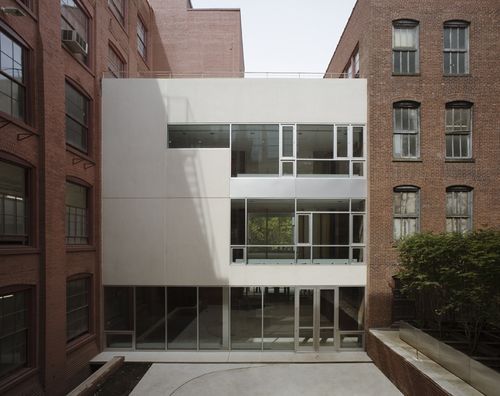 The Juliana Curran Terian Design Center has received numerous awards including Building Brooklyn Awards from the Brooklyn Chamber of Commerce, which recognize construction projects that enrich Brooklyn's neighborhoods and economy.

Click here to read the article in full at www.archinect.com 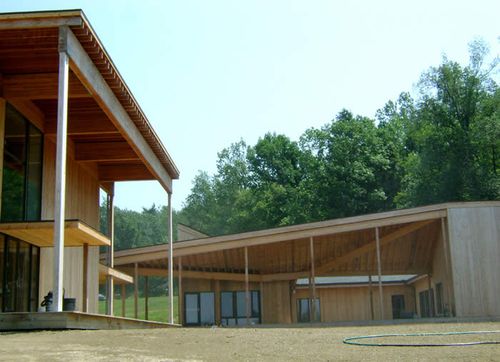 Below is an excerpt from the article; click the link at the end to read it in full at architectureweek.com:

Construction continues on the Won Dharma Center in Claverack, New York. Hanrahan Meyers architects of New York City designed the 28,000-square-foot (2,600-square-meter) recreational and spiritual retreat for client Won Buddhism of America, Inc. The center is located on a 500-acre (200-hectare) property on a gently sloping hill. Sited as far as possible from the rural access road, the buildings are oriented toward the west and south to maximize views and daylight, and are also organized around the dual concepts of spiral and void. 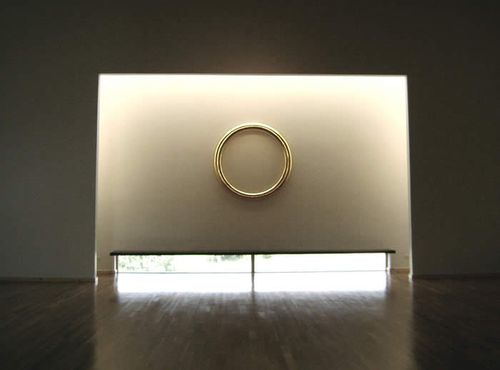 The 3,000-square-foot (20-square-meter) meditation hall is conceived as a simple rectangular void and a lightweight frame to the natural surroundings. Its wooden structure is exposed on three sides to form entrance and viewing porches, while the interior offers views of the Catskill Mountains from the meditation space itself." 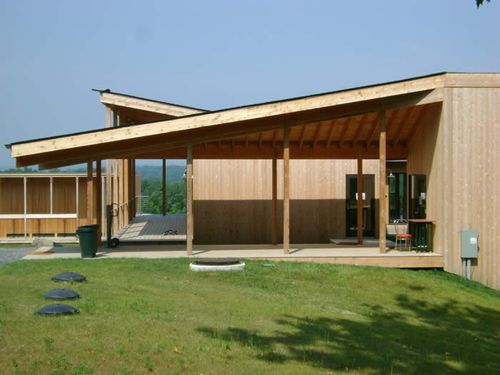 What People Are Saying about Infinity Chapel: hMa in Specifier Magazine 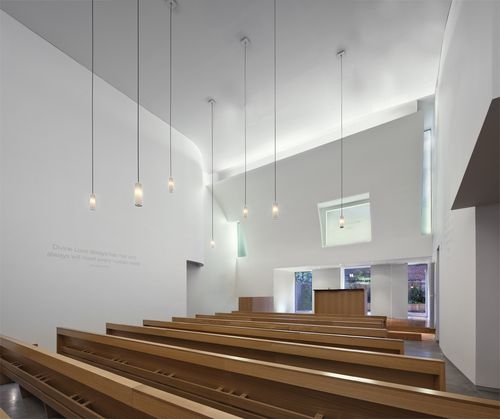 Below is an excerpt from the article by David Lindaya on Specifier.com, click the link at the end to read the complete review:

"A chapel is a vessel for faith – a room, building or space standing between the real world and a higher transcendence for all believers. It is a place of sanctuary. When Victoria Meyers architect (hMa) designed Infinity Chapel for the Tenth Church of Christ, Scientist, she created something truly special. The place of worship was guided by perfect geometries, pure materials and mathematical principles; resulting in sensuous surfaces of curves in light. What has been created is an intimate space where the real world, sanctuary and spirit are one through architecture that captivates the soul.In New York’s Greenwich Village, the luminous Infinity Chapel is a transfiguration of a once concealed, gloomy interior. The chapel is a sculpted 4000-square-foot cubic volume of perfectly placed walls and openings derived from pure mathematical forms – squares, golden sections and hypercubes. Slivers of natural light accentuate the surfaces of the chapel’s complex curves that celebrate the faith of all worshippers within.

Three inwardly-curving walls from the south, west and north suggest large spheres – ‘spheres of light’. The illusion of a continuously-curved room is created by interplays of walls that suggest an infinite surface similar to the forms of the Klein bottle or Möbius strip – simple figures that suggest infinity by having no beginning and no end."

Click here to read the complete article on Specifier.com