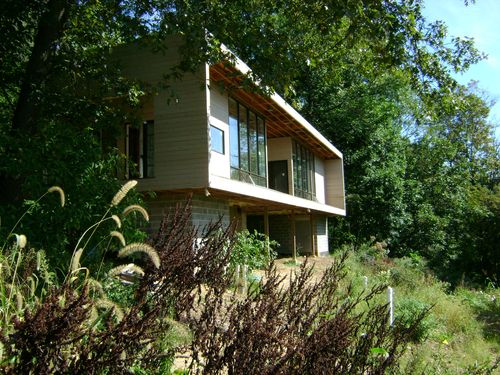 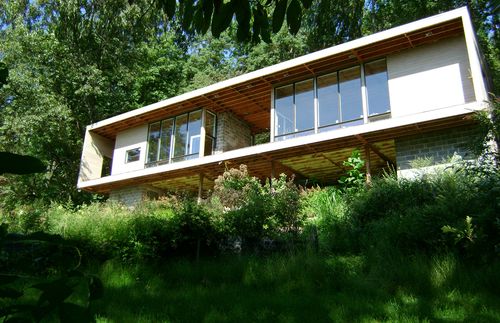 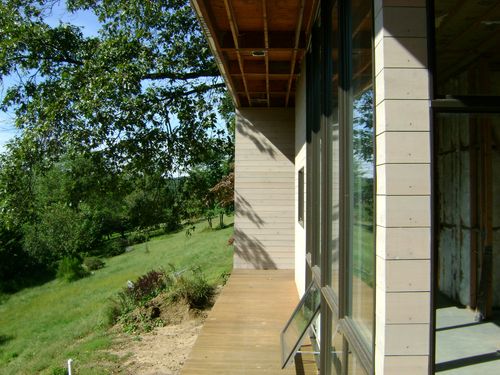 The outdoor fireplace hearth houses a flue for a second fireplace in Susan's writing studio, and for a third fireplace, in the open outdoor area below the 'Bridge'.  In addition to producing their own bodies of work, Joe and Susan own Pierogi Gallery as well as the Boiler space for performance and art, in Williamsburg, New York, and regularly entertain artists from their New York gallery at their home in Pennsylvania. The couple's desire for an appropriate setting to entertain artist friends created part of the program for the new studio building.

Click here to see more photos of Bridge-Studio on www.hanrahanmeyers.com 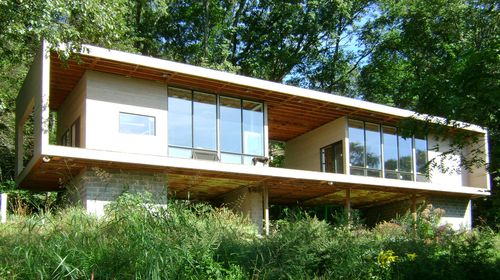 Architect Victoria Meyers presents the work of hMa, and discusses the influences in the work from Iannis Xenakis.  In particular, Ms. Meyers' talk focused on the firm's DWi-P (Digital Water i-Pavilion), designed for Battery Park City's North Neighborhood, and scheduled to open in 2012.  hMa specializes in designing public buildings and masterplans for cities and campuses, incorporating state of the art green technologies, while also fostering collaborations with artists from around the world.  hMa has collaborated with Michael Schumacher, David Teeple, and Jane Philbrick on various projects in the past.  Jane Philbrick's latest site specific installation opened at Mass MoCA in September 2011.

About the Program: Iannis Xenakis: Composer, Architect, Visionary explores the fundamental role of drawing in the work of avant-garde composer Iannis Xenakis (1922–2001). One of the most important figures in twentieth-century music, Xenakis originally trained as an engineer and was also known as an architect, developing iconic designs while working with Le Corbusier in the 1950s. This North American premiere of Xenakis's visual work is comprised of samples of his pioneering graphic musings, architectural plans, compelling preparatory mathematical renderings, and pre-compositional sketches—in all, nearly 100 documents created between 1953 and 1984. The exhibition is accompanied by an exciting schedule of public programs, concerts, and symposia around New York City. Co-curated by Sharon Kanach and Carey Lovelace, the exhibition traveled to the Canadian Centre for Architecture (June 17 – October 17, 2010) and the Museum of Contemporary Art, Los Angeles (November 7, 2010 – February 13, 2011). 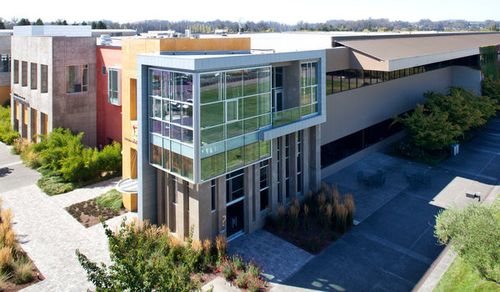 A new type of financing will pay for a solar array at this California development.  Photo:  Peter DaSilva for The New York Times

Excerpt from the article:

"A business consortium that includes Lockheed Martin and Barclays bank plans to invest as much as $650 million over the next few years to slash the energy consumption of buildings in the Miami and Sacramento areas. It is the most ambitious effort yet to jump-start a national market for energy upgrades that many people believe could eventually be worth billions.

Focusing mainly on commercial property at first, the group plans to exploit a new tax arrangement that allows property owners to upgrade their buildings at no upfront cost, typically cutting their energy use and their utility bills by a third. The building owners would pay for the upgrades over five to 20 years through surcharges on their property-tax bills, but that would be less than the savings.

The consortium is led by a company called Ygrene Energy Fund of Santa Rosa, Calif., which has already won an exclusive contract to manage a retrofit program for a half-dozen communities in the Miami area, with the city expected to join in a few weeks. It is in the late stages of completing a contract with Sacramento, and is seeking deals in other cities."


Click here to read the full article on www.nytimes.com