For the past twenty years, I have crafted an architectural and urban design practice (hanrahan Meyers architects) that includes sound as a formal element of the designed environment.  Music is the art of sound, and architecture is the art of building.  Shape of Sound is an attempt to catalogue the cross-fertilization between sound and architecture, and how these two disciplines unite to generate a unique hybrid practice. 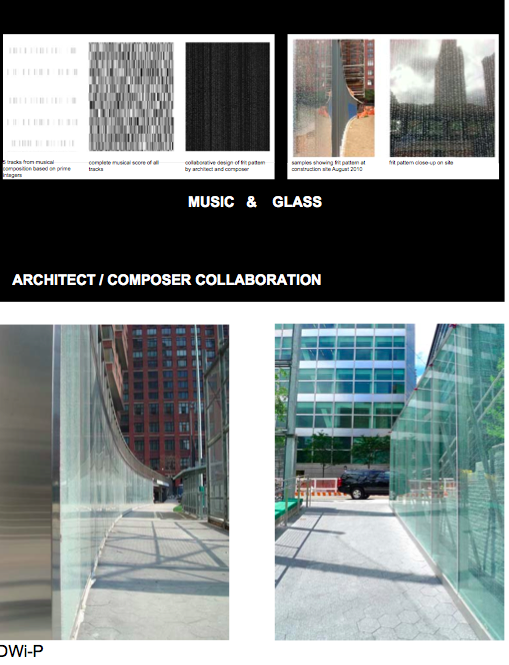 I began using sound as part of my architectural practice in 1995, when I developed a concept for a museum installation titled Sampling.  Sampling was proposed to the San Francisco Museum of Art, and included works by sound artists Stephen Vitiello and DJ Olive; visual artists Bruce Pearson and Roxy Paine;  and works from hMa, my architectural practice.   Contemporary art, architecture, and sound are deeply concerned with sampling and samples.  Contemporary architects, visual artists, and sound artists use ‘samples’ as operative tools to create post-modern representations of contemporary culture. 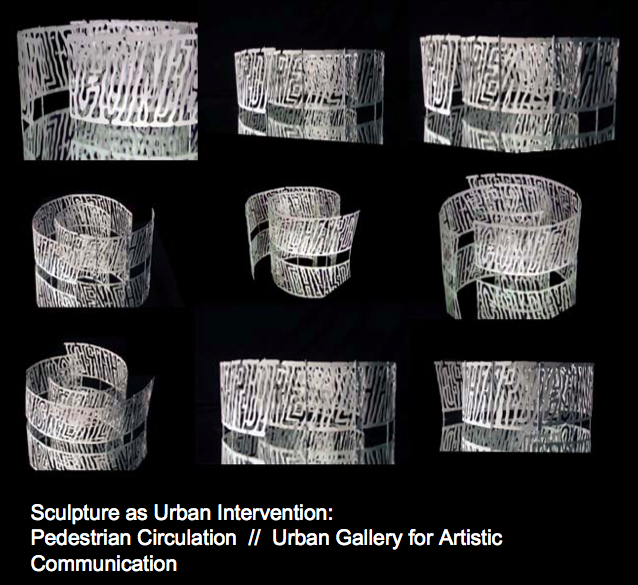 Contributors to the book:

Since 2002 I have collaborated with the composer and sound artist Michael Schumacher (www.michaeljschumacher.com).  You can see Michael’s work if you look at the cover of this book.   My firm, hanrahan Meyers architects (hMa) commissioned Michael to develop a score for our building, DWi-P (Digital Water i-Pavilion), and we etched Michael’s score for his composition (WaTER) onto the building’s glass façade.  You can hear Michael’s score through the DWi-P App, or by visiting the SoS web page:  www.shapeofsound.us. 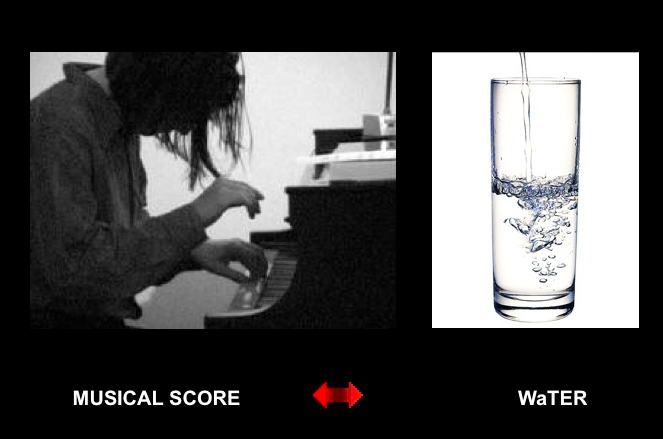 Sound is a mechanical wave that translates from our ears to our brains as sound.  It may seem curious that someone who works in the highly visual media of architecture and urban design would develop a body of work that uses sound  - an invisible energy wave -  as a focal point.   When architectural form is used to frame a phenomenon, and renders it, in this case, sound, ‘visible’:  a visceral link is created between the spaces that we occupy, and our experience of the world. 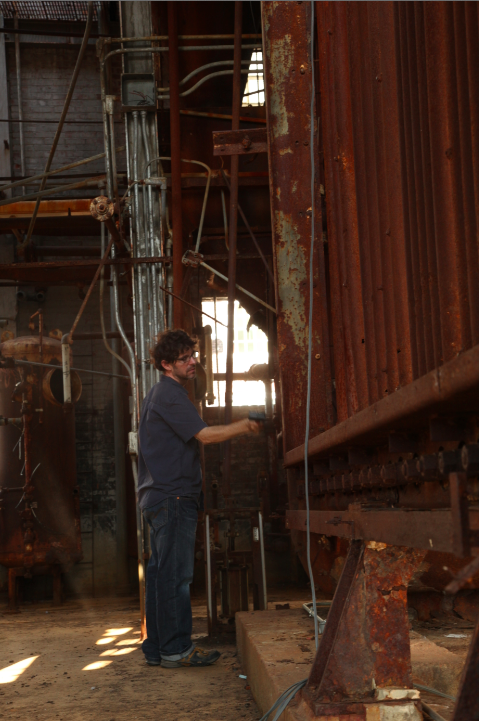 I met Stephen Vitiello, whose piece, ‘A Bell for Every Minute’, animated the High Line project in New York City, when Stephen and I worked on the ‘Sampling’ show.  We have continued our dialogue about the effects of sound in the environment ever since.  You can see Stephen’s work, which is critical to this book, in the chapters on Sound Urbanism (pages 80 – 81), and Sound Art (pages 117 – 123).

hMa also collaborated with sound artist Jane Philbrick on an architectural and sound installation for Socrates Sculpture Park in Queens, New York. Vox Harbour was a spoken word installation in a waterfront park that included the construction of three ‘listening and speaking’ stations.  The stations were wood shells designed by hMa to capture sound within naturalistic, bio-morphically shaped ‘talking’ booths.  The booths were designed for users to stand in and speak (single users).  Words were recorded and overlaid by words spoken by prior participants.  The concept was to capture multiple recordings representing the broad cultural heritage of Queens.

Shape of Sound and Designing with Light:  a series connection

Prior to Shape of Sound, I published Designing with Light in 2006.  DwL included research on light by Dr. Lene Hau, from Harvard’s Physics Department;  sound works by composers Arvo Part and John Cage; videos by artist Bill Viola;  and light art by Dan Flavin.   All of these practitioners had developed artistic and scientific works that were, on the one hand, relevant to their particular media, but also, at the same time, addressed to the issue of how light affects space. 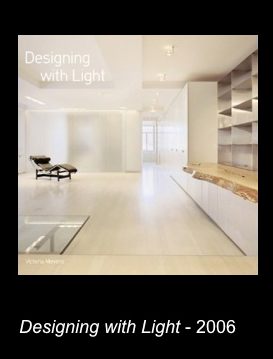 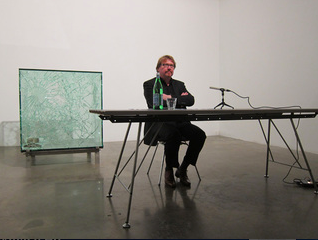 Shape of Sound was planned to follow the methods of inquiry set forth by DwL.  Architecture is an art where all of the senses are engaged.  SoS is a book that looks at sound as an objective, formal element of design, using methods of critique and investigation, similar to the critical methods used to study light in DwL.

Our perception of the sounds that we hear changes over time, and is directly related to the contemporary technologies of any given place and/or time.  The sound of a Medieval village was very different from the sound of a town with factories during the industrial era. Our contemporary sound perception of the city is highly displaced through the on-going dialogue that smart phone users hear through their headsets.

The sound of the city today is more of a hum than the grinding of factories from the industrial age, but we also have cars everywhere, and airplanes overhead.  There are a lot of sounds, in addition to the sounds of nature.  SoS is an attempt to isolate and critically evaluate many of those sounds, and make them a conscious part of the design discussion about the city and the building.

Our contemporary sense of sound is conditioned by digital technologies.  The generation coming of age grew up listening to the world through headphones.  This generation hears the world differently than prior generations, and part of what this book looks at is this very difference. hMa explores that difference in particular in our recently completed DWi-P project (Digital Water i-Pavilion) at Battery Park City.

Walls are a traditional element of the language of architecture.  Columns and walls are the basic language of architecture taught in the first year of architectural design studies.  Our perception of walls changes radically, however, if they become ‘green screens’ for the projection of imagery and sound.  This book begins to touch on recent digital innovations, as we move toward intelligent walls that respond to human interactions assisted through biologic and electronic sensory systems.  The emergence of intelligent systems, manifest in interactive electronic and biological interfaces that interact with building users, is changing the experience of our physical environment.

The object of our interaction with the built environment is no longer the materiality of walls and surfaces.  The critical focus of architecture and urban design is becoming the continuous and interactive surface of web-based information.

Iannis Xenakis, Le Corbusier, and the Phillips Pavilion : Precursors of where we are today

The work of structural engineer and composer Iannis Xenakis, composer Edgar Varese, and architect Le Corbusier at the Phillips Pavilion has been a strong influence on contemporary design.  As architecture faces the rapidity of contemporary technological advancements, I would reference readers to the Phillips Pavilion, which was, in its day, a prescient and futuristic example of the sort of interactive wall surfaces that we are beginning to see constructed in public spaces today. 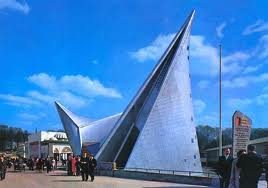 We face a singular moment in history.  Architecture is searching for new points of reference as a response to the disintegration of its material form through the sensory experiences of the Internet and digital media.  My idea with Shape of Sound was to explore this edge, and to comment on where we stand today, with respect to these various and differential forms of media and knowledge as they interact with and alter our perception of the physical world. 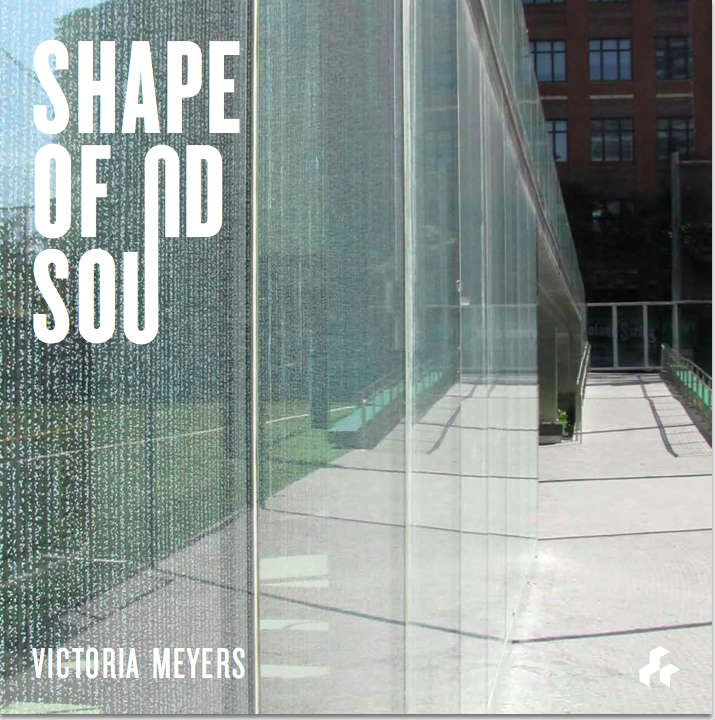