hMa approaches the design of the Queens Library through the idea of the garden.  This page shows three different configurations of the garden. 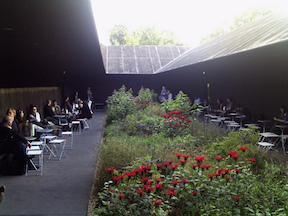 The Hortus Conclusus (Latin: enclosed garden) is an essential aspect of the history of modern western garden design.   Hortus Conclusus in the Medieval era referred to an enclosed, private garden.

In Queens, there is a contemporary history of enclosed ‘community gardens’, which are also enclosed gardens. In the Queens gardens, small plots are divided between the community, and each becomes a landscape portrait of its owners.

hMa is designing the Queens Library as a Walled Garden where visitors enjoy peaceful contemplation of ideas, within a garden. 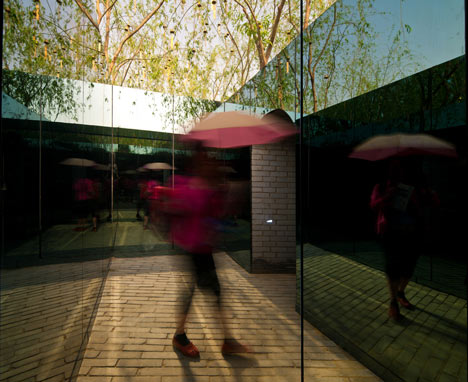 Queens Library : a Hortus Conclusus for study and contemplation

through materials, textures, and colors on the floors, ceilings, and walls. 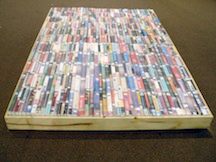 Queens Library : a repository for books/ an escape from the urban realm

Hortus Conclusus includes pathways for walking, moving and thinking.  hMa’s DWi-P opened to the public in 2014:  a building that delaminates into gardens with paths that make the building envelop feel invisible on its site.  DWi-P gives the sense of walking in nature both inside and outside the building. 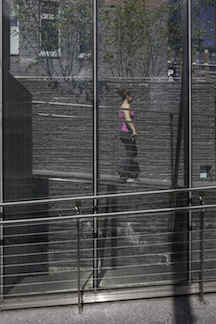 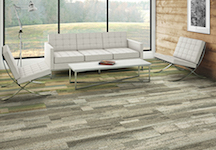 At hMa's Queens Library, paths use natural colors to lead visitors from entry, to circulation desk, adult reading room,  teens area, children’s library, and to the community room. hMa’s palette is based on an idea of movement through nature, from they entry, and through the library.  Visitors are led from entry to the circulation desk by a moss-covered, wood wall that passes from the entry door, through the vestibule, to the circulation desk. The desk is designed to reference colors of flowers and grasses. 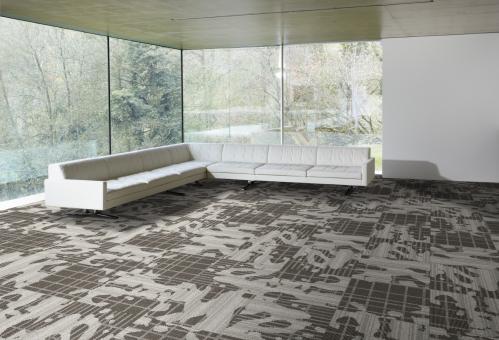 The Library floors reference nature’s grasses, flowers, tree bark, and earth.   Areas in the adult and children’s libraries are anchored as lawns, using ivy (adult’s), and grass (child’s) in the sitting and work areas. In the teen area, seating and work areas are more active, with stripes of flower references.

a Hortus Conclusus for study and contemplation

Sverre Fehn’s Nordic Pavilion is one of hMa’s typology references for the Queens Library. Nordic Pavilion, designed in 1962, is still used today for gallery exhibits representing Sweden, Finland, and Norway. The Pavilion focuses on nature, with an open grid-roof of criss-crossing, thin, concrete beams, designed to simulate the effects of dappled sunlight passing through tree branches. The neutral whiteness of the concrete pavilion encircles, and emphasizes trees that grow through the roof. 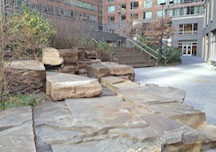 At Queens Library, hMa also applied principles of movement through nature, based on ideas developed in their Master Plan for Battery Park City’s North Neighborhood.  At BPC hMa used the the intertwining of nature, through the development of strategically located parks and green roofs, to develop a language of design based on nature and walking paths.  hMa called the new grid developed at Battery Park City Woven Fabric. Woven Fabric defines cultivated green areas that weave the North Neighborhood together.

Queens Library : a Hortus Conclusus for study and contemplation

hMa’s goal is to create the sense of a walled garden with edges defined by bookcases, and an interior filled with color and light. The Queens Library will be a garden for thinking and contemplation. The library’s walls are a barrier to the busy-ness of the urban street -   an envelop that offers the peace and contemplation of the Hortus Conclusus.

The Oxford English Dictionary defines praxis as ‘that through which theory or philosophy is transformed into (a) practical… activity.’ In architecture, praxis refers to the practice of making buildings in critique with theory and the history of ideas. Praxis in architecture refers to a practice that builds with the integrity of theory behind every detail. 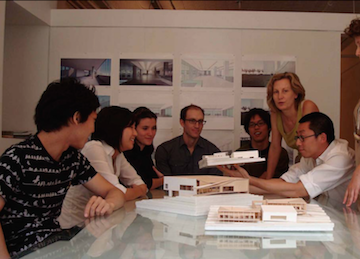 If you are an architect and practice, your work encompasses ideas, philosophies of making, and research. I separate the notion of a studio or atelier, from that of an ‘office’. An office references an architectural practice that intersects with commercial interests. Studio or atelier references a more elevated idea of practice as a philosophical and theoretical critique of building, or praxis. 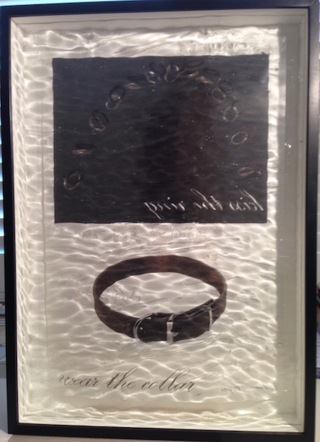 As an architect who builds, teaches, writes, and produces art, I see architecture as a finely calibrated mirror. Architecture as praxis is akin to building the opposite side of our selves. By opposite, I refer to architecture as a critical operation: a mold or mask that allows us to see ourselves - as a reflection – similar to the ‘oppositional writing’ of Leonardo da Vinci. Architecture, by this definition, is similar to the butterfly’s cocoon or the Halloween reveler’s mask - a formal registration of our selves, at any given moment in time. By ‘selves’, I refer to the common identity of a larger group of citizens of a broader culture, and not to the singular person.

As a practitioner, I have an architectural practice, hMa, that is a reflection of my own mind, calibrated by a partner - Thomas Hanrahan – Dean of Pratt’s School of Architecture.  I teach and am actively involved in architectural education. Until 2005 I was the core-coordinator at Columbia’s GSAPP; more recently I was the David Niland Chair at the University of Cincinnati; previously, I was a professor at Cornell’s School of Architecture.

Professional schools cannot operate successfully without architectural practitioners, both as part-time and tenured faculty – due to the necessary requirements of praxis. Without practicing architecture – it is impossible to understand how or what should be emphasized in the instruction of students of architecture. Praxis involves practice, teaching, and research.

Architects build things. Beyond studying the history of architecture, and doing an apprenticeship with a licensed architect, architects learn their craft by going into the field and making things. Architecture is critiqued in the public realm. Until a graduate of architecture has that experience, she or he cannot understand the process of praxis.

Architecture involves a series of mathematical equations that make space.   At hMa (hanrahan Meyers architects), I have built projects, including Infinity Chapel, that reflect areas of human knowledge. Infinity Chapel presents a series of ideas about light, shadow, mathematics, and reflection. Mathematics and the properties of light include E = mc2, an equation that establishes equivalencies between mass, light, and energy. 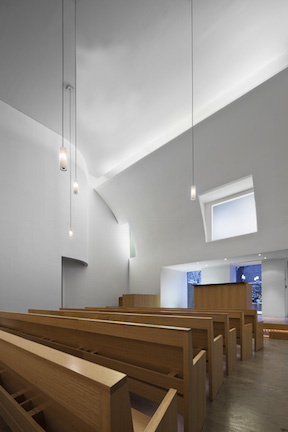 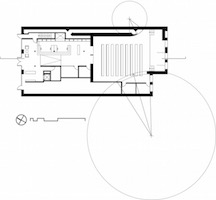 At hMa’s Infinity Chapel, light-wells frame the walk from an entry at MacDougal Street, through a reading room, through a chapel, to an outdoor garden. Infinity Chapel’s light-wells are holes cut through the concrete floor, manifest as rectangular wood objects of varying heights and shapes at the ground-floor level of the building. The light-wells frame tubes of light that mark the path from street to garden. In the Sunday school below, light-wells appear as illuminated squares and lines in the ceiling. These reflect as formal figures of light on the floor. 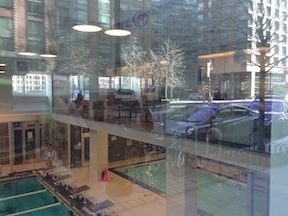 hMa’s DWi-P, Digital Water i-Pavilion, is a community center in New York City, opposite the World Trade Center Memorial site. DWi-P is dedicated mostly to swimming, while offering a variety of other community activities. DWi-P’s largest public space is its pool room facing the exterior glass wall. The pools are also visible from a glass wall in the entry to DWi-P, one floor above. DWi-P’s main façade is a 550-foot long, transparent glass wall embedded with a frit pattern, representing a sound-score by New York composer Michael J. Schumacher: WaTER. 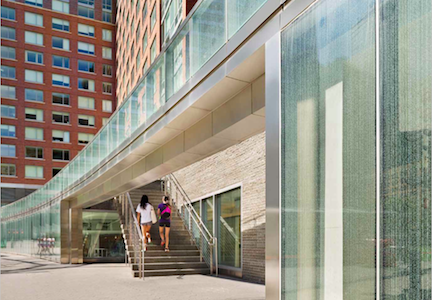 DWi-P is a building that unfolds and unravels into the landscape of Battery Park City through a series of ramps, stairs, and glass panels. The building’s roof is a public park with walkways and ramps that lead down to the Ballfields Park, east of the building. DWi-P’s east façade also faces the World Trade Center Memorial site, visible through its glass panels, etched with the Schumacher score. 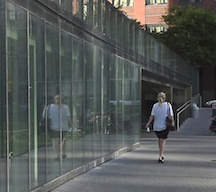 Part of what defines us as humans is how we move our bodies through space. Contemporary marathons attest to the human capacity to out-run prey in the distant past, not by being faster, but by sustaining a slow, steady run, for days. There are connections for all of us, between walking, thinking, and speaking. As a species, we need to move through space to develop and maintain our brains.   DWi-P and Infinity Chapel facilitate walking, moving and thinking, through a sound-score at DWi-P, and through light at Infinity Chapel. 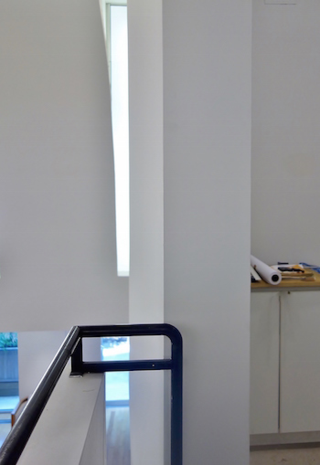 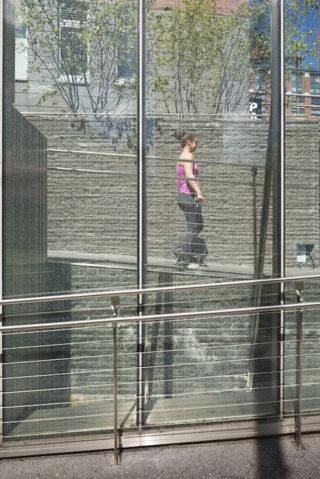 By understanding the human walk and limitations of movement, students learn how to detail and create space. The human walk has a certain length, width, and depth. These dimensions determine the basic aspects of building design, including the proper sizing of stairs, openings, and landings. It comes down to the scale of the human body. It sounds mundane; in reality, this is the basis of ephemeral creations, and praxis. 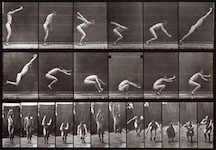 In addition to studies of human movement, light, and sound, hMa pursues the concept of ‘writing’ on/in buildings. Text on buildings captures ideas for future generations.   The concept of ‘writing on the building’ partly determined the details of hMa’s glass wall at DWi-P, and the use of light at Infinity Chapel. hMa’s most recent application of writing on built form is a sculpture titled On-In Landscape: a collaboration with noted New York artist, Bruce Pearson. On-In Landscape is literally a constructed text by Pearson: Contains Real Hard Won Insight. hMa’s application of a sound-score to the façade at DWi-P, the use of light at Infinity Chapel, and literal text in ‘On-In Landscape’, are examples of praxis. 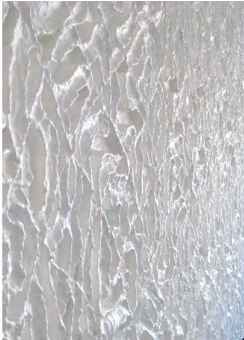 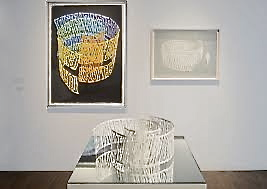 hMa’s pursuit of praxis includes homage to the ideas of Marcel Duchamp and John Cage. hMa’s linkage between architecture and praxis includes musings on physics, time, and space, cataloged in my book, Designing with Light (DWL). DWL includes discussions with Harvard physicist Dr. Lene Hau whose ideas about light inspired Infinity Chapel. DWL pays homage to the oeuvre and writings of John Cage, Marcel Duchamp, and contemporary composers and artists, including Arvo Part. 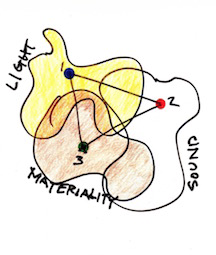 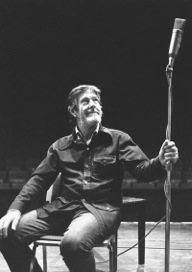 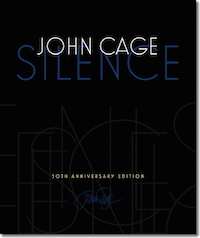 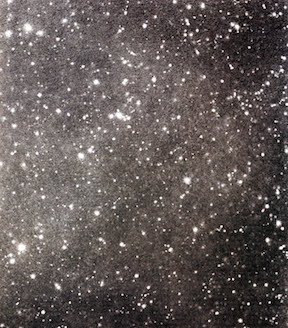 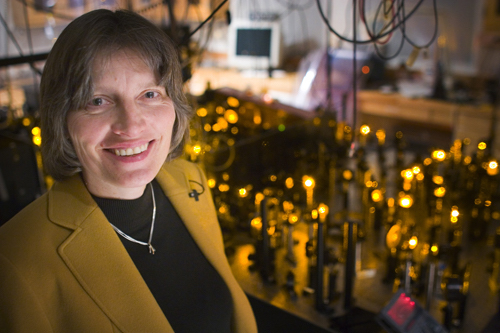 Shape of Sound, published in 2014, chronicles hMa collaborations and discussions with sound artists and colleagues, including Stephen Vitiello, Eric Howeler, and Joao Onofre. Sound compositions, like architecture, reflect changing cultural memes. hMa uses sound, light, and text as secondary ‘mirrors’ - or filters - for the architectural process, and we see this also as part of our application of praxis to architecture. 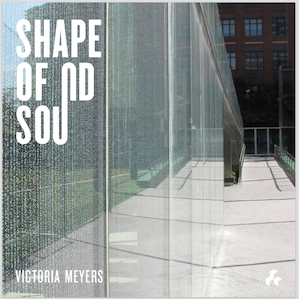 The curriculum in schools of architecture lays the foundation for future architects. Praxis is an inherent aspect of the discussion within any architecture school. A depth of thinking and intellectual discourse acts as a scaffold for architectural education. Remove the practitioners or the theoreticians, and there is no praxis.

An abbreviated list of studios I have taught over the years cover topics investigated in hMa’s work: Line; Library of the Spoken Word; Time/ PassageWay; S o U n d. My design studio programs present a chronicle of ideas, tested in the academic environment, and applied in hMa’s design studio.   For any architectural work to be a serious discourse, it must be pursued as praxis: built work, grounded in the history of ideas, theory, and philosophy.

I would like to end with a quote from a favorite poet, as we reflect on the notion of praxis, and how it relates to education and architectural practice:

‘Education is the ability to listen to almost anything without losing your temper, or your self-confidence.’ (Robert Frost).

I would also like to end by giving a special ‘thank you’ to Professor Mara Marcu, whose serious and astute study and production in architecture provides an excellent example of praxis.

Tags: and there is no praxis., The curriculum in schools of architecture lays the foundation for future architects. Praxis is an inherent aspect of the discussion within any architecture school. A depth of thinking and intellectual discourse acts as a scaffold for architectural education. Remove the practitioners or the theoreticians