building based on infinity 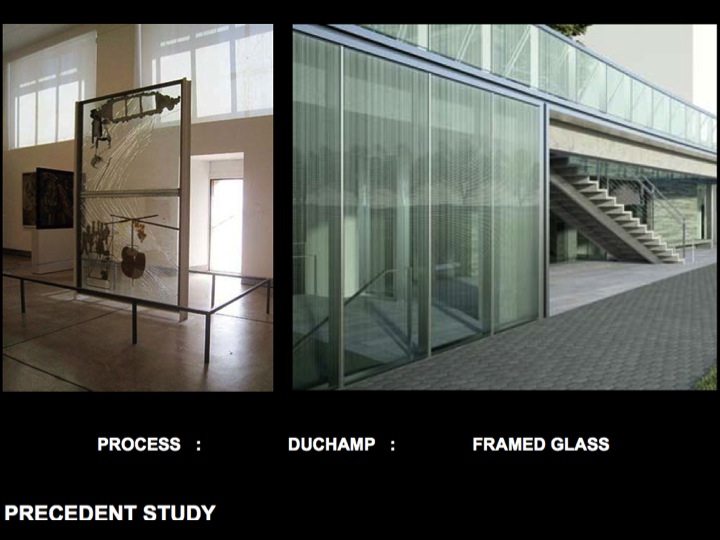 Process:  Duchamp:   Framed Glass.   This refers to architects hMa's process (Victoria Meyers architect) in designing DWi-P :  Digital Water i-Pavilion.  The building was designed around ideas about how glass can have a presence that exceeds its physical thickness.  The thickness can be determined through its intellectual ideas, which can greatly exceed the physicality of the glass thicnkess.  In the case of Marcel Duchamp's Large Glass, that thickness was processed and presented as a physical rendering of Einstein's Theory of Relativity, cut into the glass surface.  In the case of hMa's WaTER wall, that thickness could be seen as an exposition about the thickness of current ideas about physicality, as related to digital technologies;  and the presentation of a social critique about the increasing scarcity of clean water, even as the world's water levels rise, due to melting ice caps. 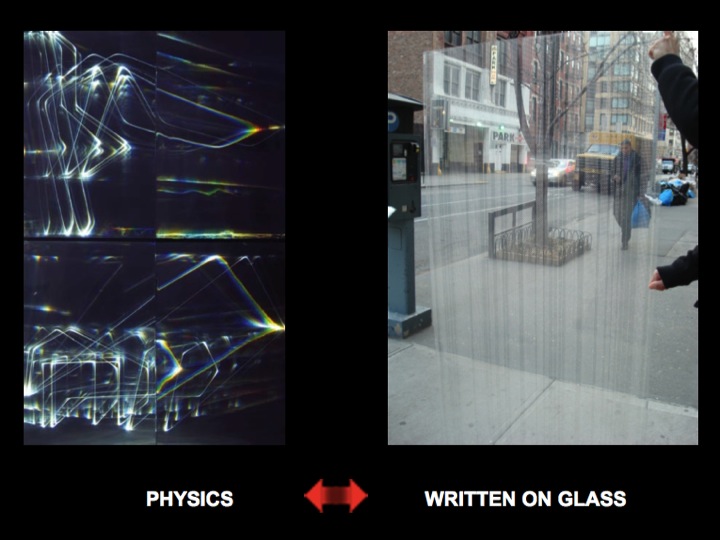 In both cases:  hMa's glass wall, as well as the Duchamp glass, the result was Physics, but also a social critique, written in (on) glass.  These critiques and their 'thicknesses', increase the intellectual thickness of the glass. 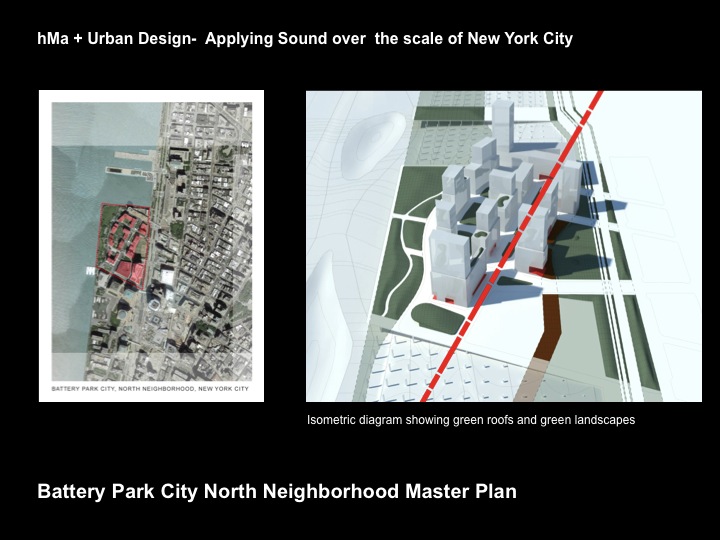 hMa's ideas about sound and space, are applied to buildings, as well as to urban spaces.  As master plan architects for Battery Park City's North Neighborhood, hMa overviewed the development of over one-million square feet of LEED certified green construction.  We also overviewed the development of a park system that was linked together by a concept hMa describes as : woven space, as well as by sound, in the installation (not yet achieved) by Ann Hamilton in Teardrop Park, in the Water Wall at Teardrop Park,  and in hMa's digitally interactive wall, at DWi-P. 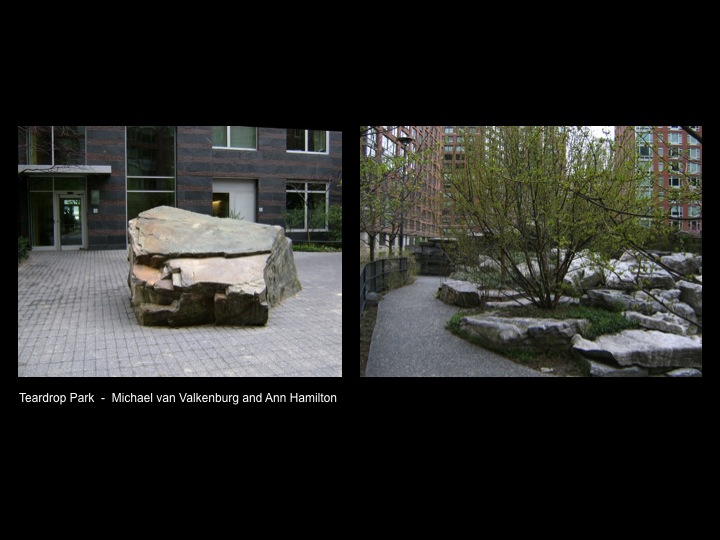 Above:  Teardrop Park.  This project was conceived as a collaboration between hMa, Michael van Valkenburgh, and the artist, Ann Hamilton. 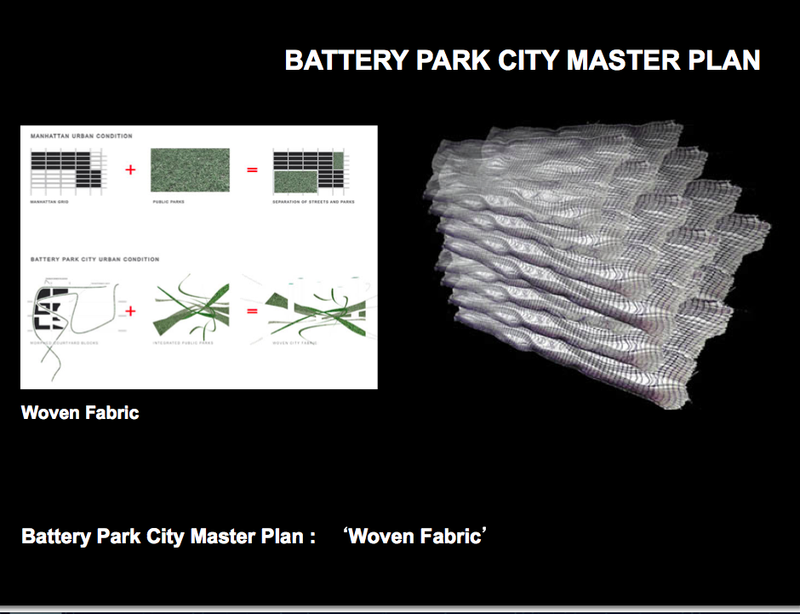 Above:  Woven Fabric:  hMa conceived the site plan of BPC's North Neighborhood as a 'woven fabric'.  This fabric consisted of a series of parks and buildings that weave together as a single physical fabric, both in terms of their Green Construction, but also by offering several occupiable Green Roofs for public use, including the Irish Hunger Memorial by artist Brian Tolle (below) as well as hMa's Green Roof over their building, DWi-P, publicly accessible from North End Avenue. 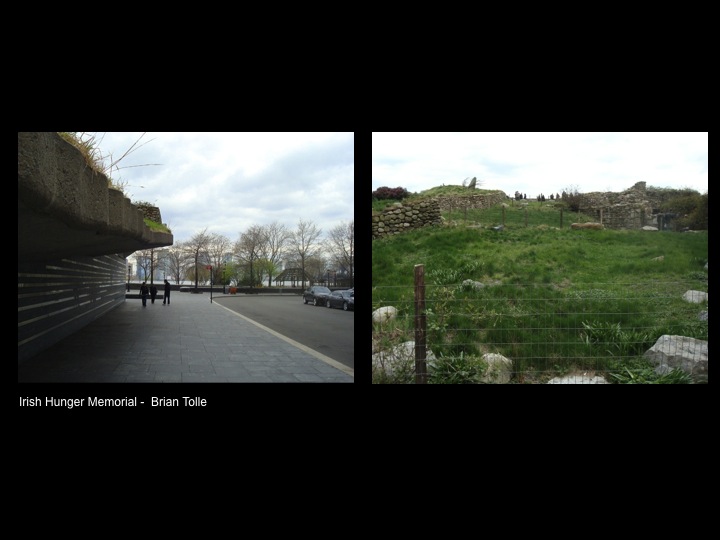 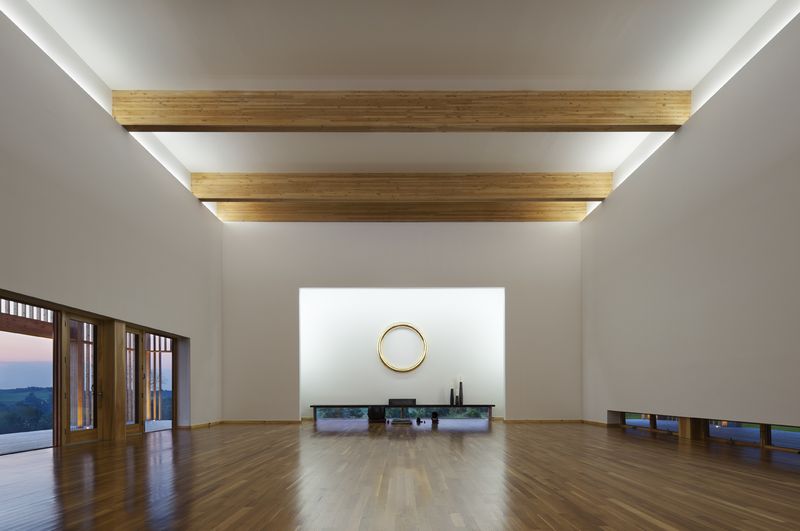 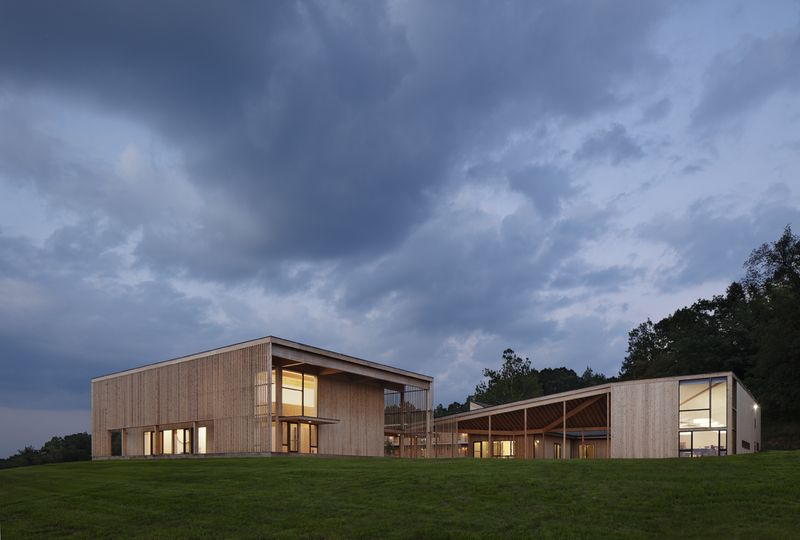 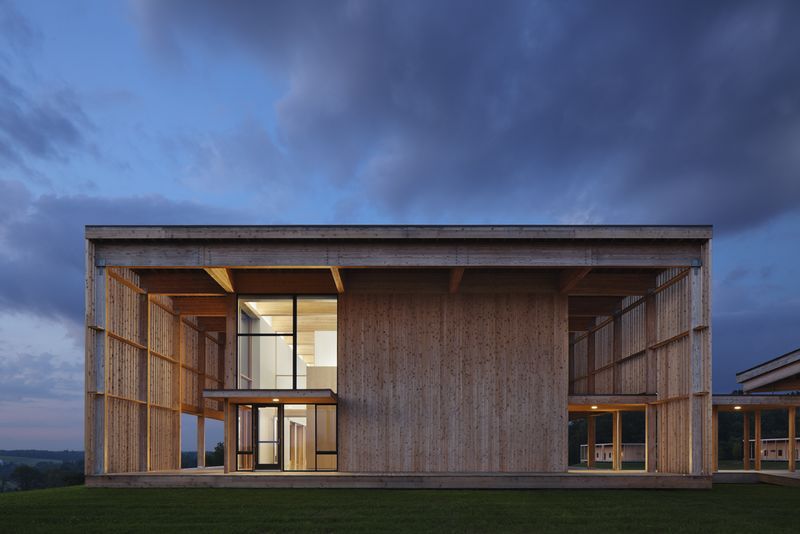 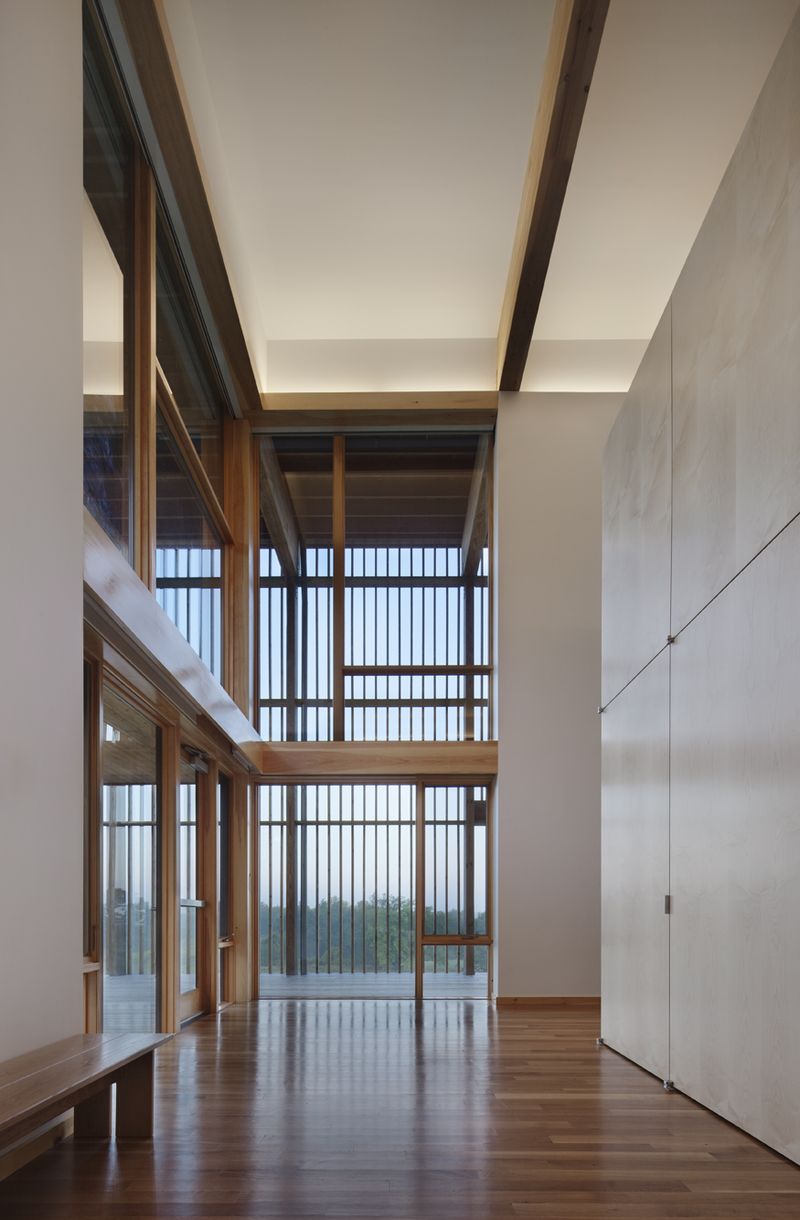 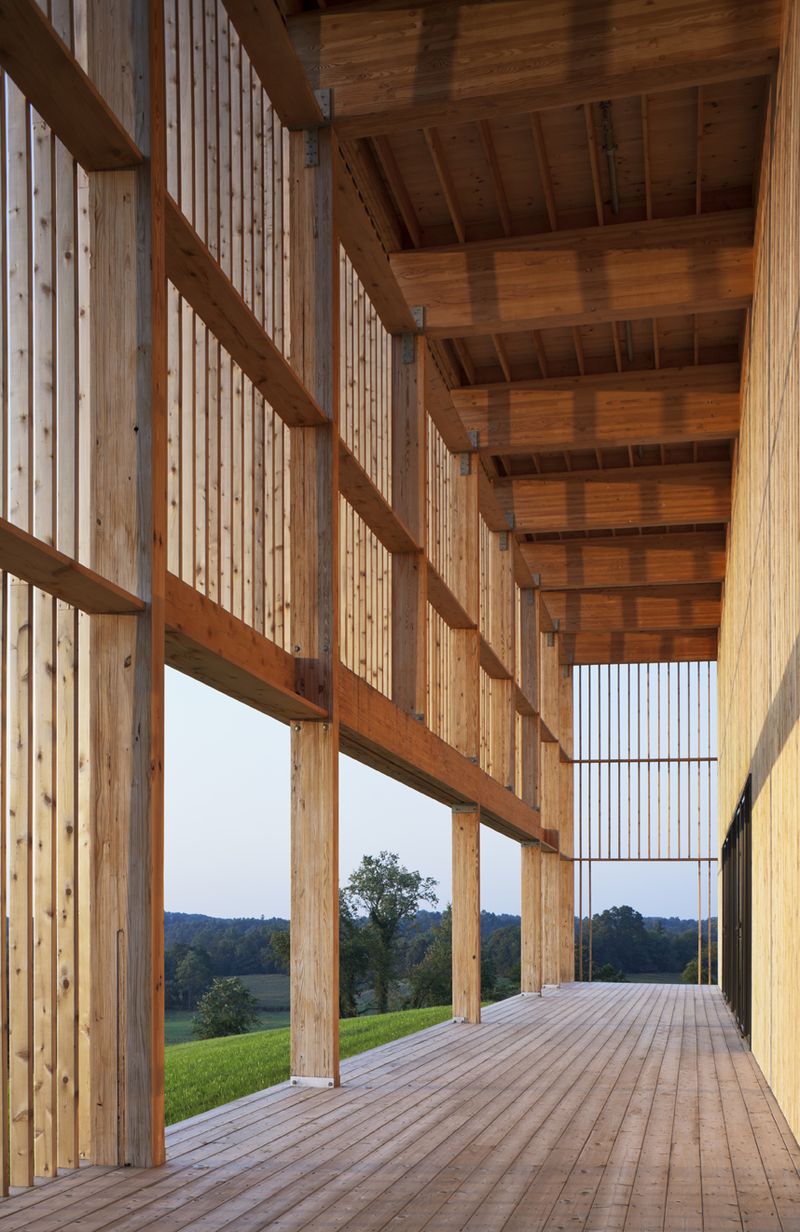 Infinity Chapel is a project that demonstrates Victoria Meyers architect's researches into sacred spaces, including ideas of infinity, weightlessness, movement, space, light and sound.  Ms. Meyers' studies of sacred space extend to the Cluniac Order, including the writings of Abbot Suger, who is credited with building the first Gothic Cathedral.  Building on this history, and following the thread of architectural design of sacred space, through Le Corbusier's Chapel of Notre Dame du Haut in Ronchamp, Ms. Meyers's development of sacred space design followed a trajectory of developing architectural innovations that spring from a close reading of historical precedents. 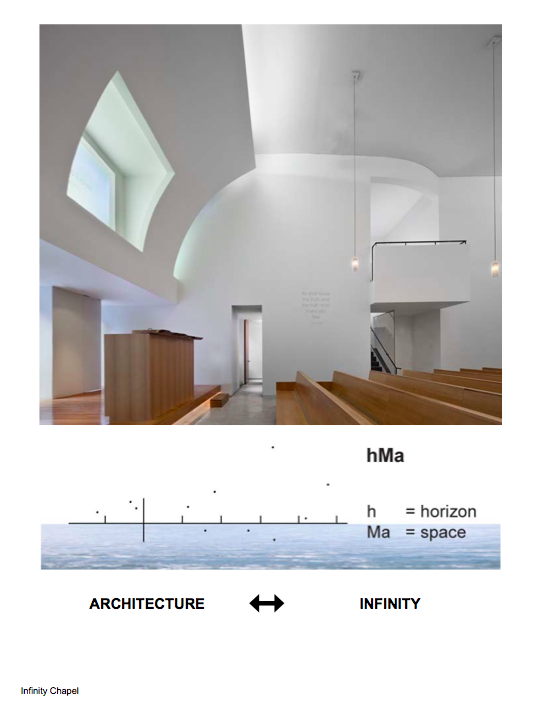 At Infinity Chapel, Ms. Meyers developed a sequence from street to chapel, led by light wells that beam light upward into the chapel, and down into a Sunday school below.  The skylights feature operable glass, and can be opened to allow sound from above to go to spaces below;  and, vice-versa, allows a chorus to sing in the lower level basement area, which serves almost as an orchestra pit, to allow sound to come up into the chapel, from an unseen source. 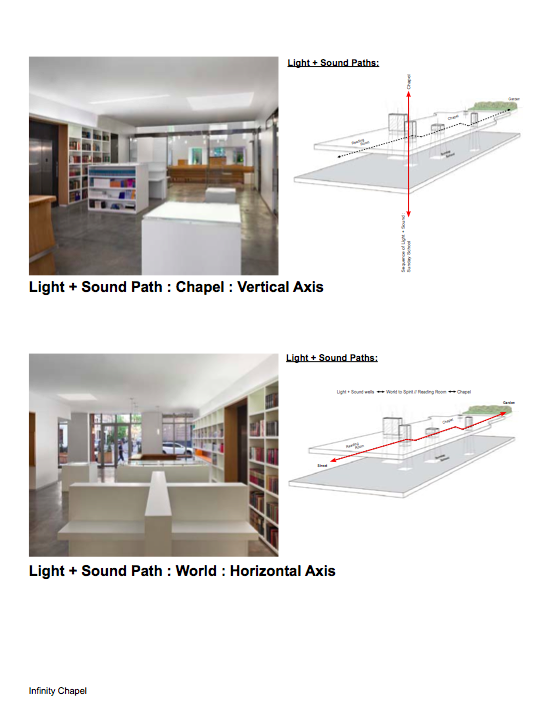 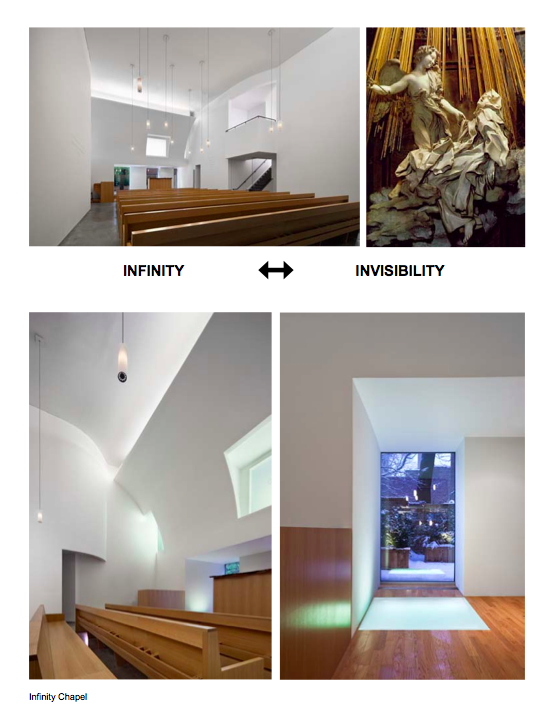 Infinity Chapel is located in New York's West Village, adjacent to Washington Square Park.  The area is dominated by New York University, whose buildings surround the park.  The Christian Science Reading Room for the new church was designed to have a friendly, Starbucks atmosphere, faces MacDougal Street, with a floor to ceiling glass facade where Christian Science books are displayed on wood shelves by long time hMa collaborator, Miya Shoji.

In October 2012, Infinity Chapel received an Award of Design Excellence from the Pennsylvania chapter of SARA (Society of American Registered Architects).