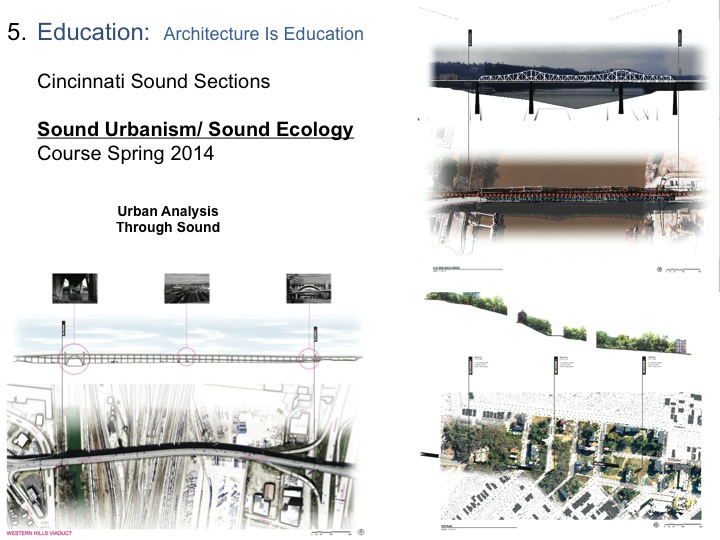 Above, top of the image: student drawing of the Bridge over the Ohio River, separating Ohio and Kentucky.  This is an area of intense industrial activity and shipping.  Below, left side of the drawing:  the Viaduct that crosses train tracks that lead to the main train station in downtown Cincinnati.  When the Mid-West was a center of industrial manufacturing, there were  hundreds of trains /day passing below this viaduct.  Today there are a few trains/ day, and the train station is a museum.  The sounds generated by trains coming through Cincinnati are different than they were 100 years ago.

In addition to drawings, students also made sound recordings of each section.  The goal was to generate sections that explore visually and through sound, areas that register significant change to Cincinnati. 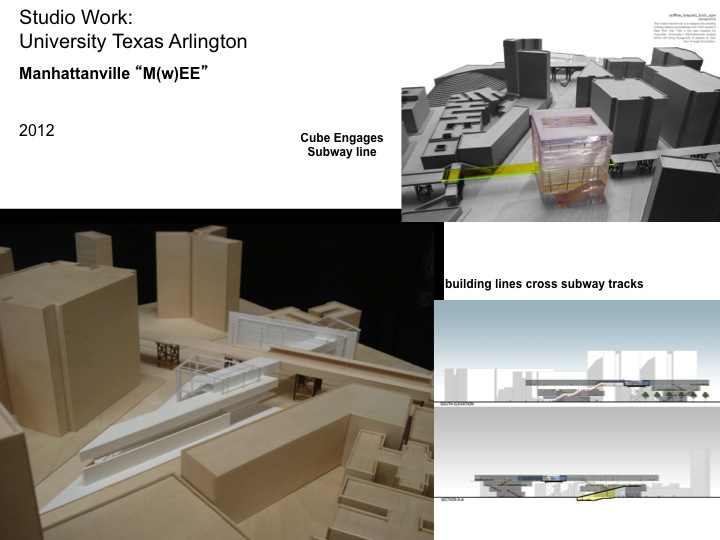 Above:  Meyers' 2012 Graduate Studio at the University of Texas:  Manhattanville M(w)EE.  Students were asked to design a new Subway Station for the 125th Street  Subway Stop in Manhattan.  This is an area where the NYC Subway is elevated above ground.  125th Street is the lowest elevation in NYC.

This has become a significant stop on the # 1 Train because Columbia University is building a new Campus here.  Students were asked to design a subway stop capable of handling 10,000 people /day.  Each Student also developed a program to go with their stops.

We show two projects:  one imagines a new Bio-Engineering Lab as a linear bridge over the elevated subway.  The other project is a translucent Cube -  an arts building -  that hovers around the stop, with the subway passing through the base. 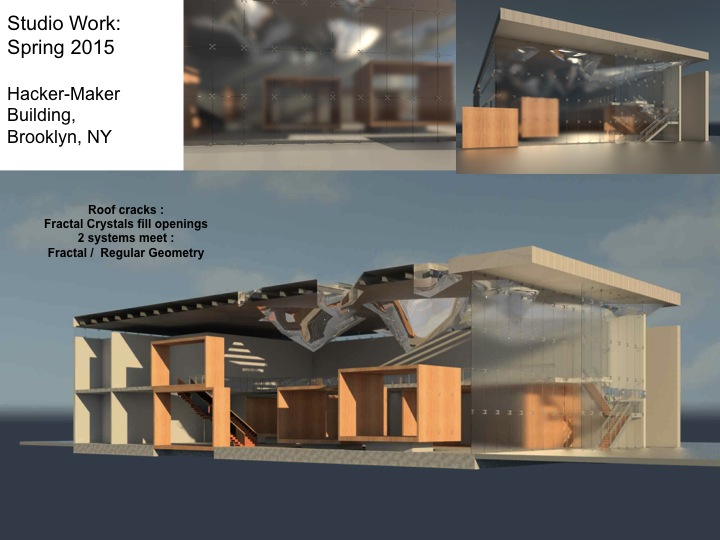 Meyers' Spring 2014 Studio, above.  Meyers asked students to design a ‘Hacker-Maker’ building in downtown Brooklyn.  The studio concentrated on the design of roofs, and open spaces for working.

The project from Meyers studio above,  has a roof with fractal openings, where crystalline shaped skylights drop through the roof into the Hacker-Maker space.  Hacker-Makers get randomly placed cubes to work in.  The interface between two systems of form:  the formalism of cubes and rectilinear space, juxtaposed to fractals and crystalline forms -  creates a dynamic space for creative work. 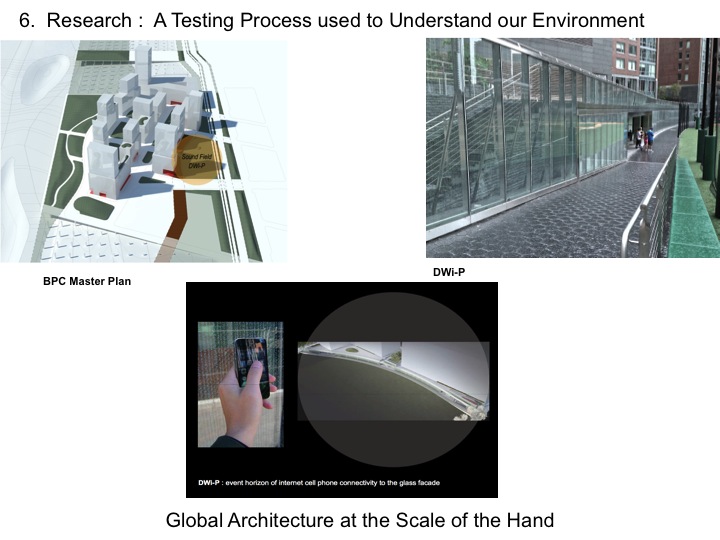 Research is how we test our environment.  It is ultimately - how human cultures grow.   We are showing, above, hMa’s project -  DWi-P -  opened in 2014.  DWi-P is a building that presents a complex overlay of Sound Composition / Glass// and Cell Phone Technology.  DWi-P's glass Wall has a score etched on it, is embedded with Bluetooth, and has an App.  The DWi-P App will read where visitors are in space, and visitors can point cell phones at the wall, and play the Schumacher composition, WaTER, etched on the glass as a frit pattern. 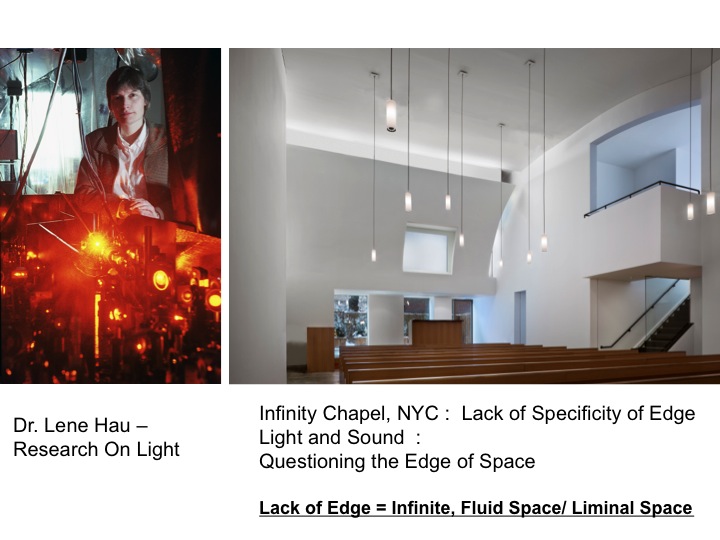 The image above shows Dr. Lene Hau, at Harvard.  Dr. Hau is a Physicist doing research on the speed of light at Harvard.  In 2006 hMa Principal Meyers wrote ‘Designing with Light’.  For research on DWL, Meyers had several conversations with Dr. Hau.

hMa  continued our conversations, and Dr. Hau had great influence on how hMa designed Infinity Chapel. Victoria Meyers architect is pleased to present hMa's DWiP (Digital Water i-Pavilion), a building that proposes an interactive surface (edge) where visitors share an interactive experience in the city of New York.  The experience is interactive as a live event, and also through an App, developed as a mirrored experience of the building.

DWiP's 550-foot long etched glass facade interacts with smart devices through an interactive media surface that embraces urban design, and encourages social interactions between participants, at the edge between Battery Park City and the lower west side of Manhattan. 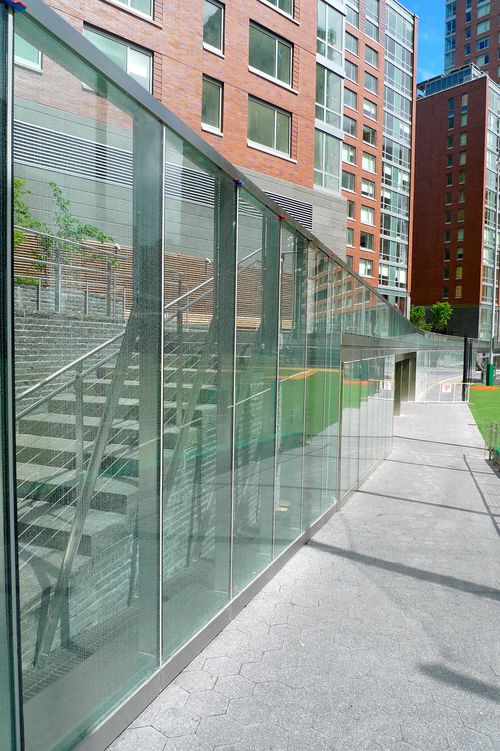 DWiP's 550-foot long glass facade is an interactive space of mediated interaction where visitors will be encouraged to post ideas, reactions, and thoughts about New York City, the waterfront, the Irish Hunger Memorial, Poets House, Teardrop Park, and other significant sites in the area.  The edge is also interactive through the DWiP App, where visitors will be able to interact with the frit pattern on the building's glass, as well as the Michael Schumacher sound piece, WaTER. 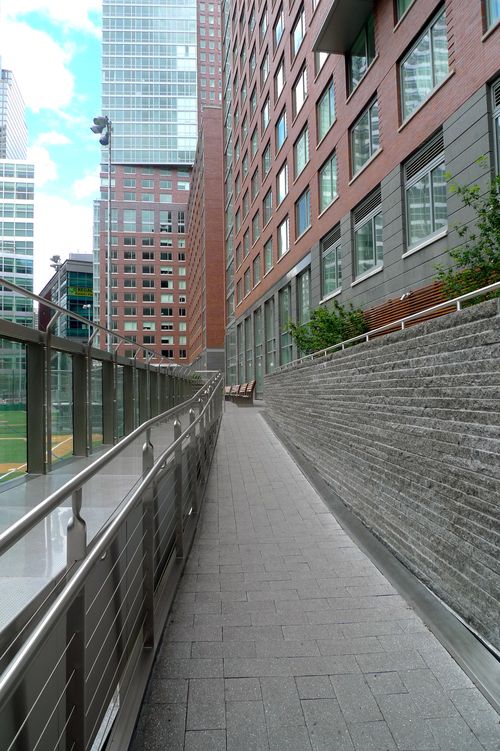 DWiP is on track to receive a Platinum LEED rating.